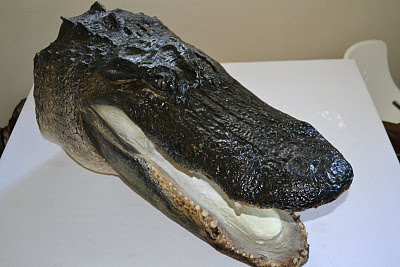 Never figured to be in the market for an alligator head - mostly because, until recently, I never appreciated the trophy value of such an item. If so desired, they are easy to purchase from just about any South Florida truck stop or curio store. It’s like with bobwhite. If I want a mounted quail, I’ll buy the table with a covey under glass from Cabelas and be done with it. A gator head is a gator head. Big deal.

Well, that was dumb thinking. Taxidermy is about preserving memories, and that trophy gator from August was quite the experience. Still, even with the gator boated, I had no illusions of a mount. That decision was aroused out of desperation.

See, I cleaned that gator myself without benefit of a hoist, fork lift, or walk-in cooler. The other hunters had to be at work, and since I held the tag, it was my burden to bear. Think about this before setting off after your own leviathan. The intelligent option was to take it to a processor, but being cheap as the day is long, this wasn’t an appealing option. Plus, I figured I could handle it on my own.

Problem was – and I hadn’t really thought it through beforehand – that gator wasn’t coming out of that boat after the three of us had miraculously rolled him in. I’d have to carve it where it sat. So, I towed gator and vessel out to my folks’ place. Since they live on a few acres out of town, I figured I’d come up with an idea of what to do with it there. Plus, I needed Mom to take pictures.

Since this is a family website, I’ll spare the disgusting details of dressing a stinky 600-pound monster in the August heat. It was an ordeal. After I’d cooler-ed the tail, I was left with this immovable gator carcass and nowhere to go with it. Mom and Dad have a bass pond in the front, but – well, they still have to live there, and if it floated up...yikes. I wasn't about to sweat further burying it. Their property borders Lakeland Highlands Scrub Preserve; I could pitch it over the fence. All ideas were muted anyhow by that pesky problem of getting it out of the boat – lift with the knees, Mom! No, I’d need a team of oxen and a system of ropes and pulleys for these tasks.

Maybe it was the onset of heat stroke, but an idea germinated. The time had arrived to push frugalness aside; I may have to buy my way out of this mess. Let me call the taxidermist. Maybe he’ll have a place to dump the body if I agree to have the head mounted.

I dialed up George Norwood in Plant City to see if he taxidermized alligators. He quoted me $11 an inch. I asked how much of the gator he required. He replied to just bring what I wanted mounted. I asked again, and he picked up on what I was intimating. George laughed and said he’d charge more to dispose the mess than mount the head.

Long story short, I ended up finding a place to unload the gator – it took three of us risking serious hernias, Mom included, to roll the gator back out of the boat and down into a sand pit on private land. But on the ride out there I was calculating and rationalizing.

That’s not a bad price. It IS a trophy animal. Who knows when I may draw a tag again or find an animal that size? 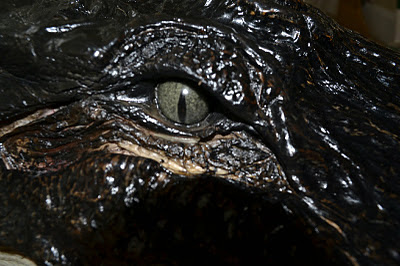 I froze the head – cut off behind the jowls for that extra size effect - and the next day took off to Mr. Norwood’s. I didn’t have anything particular in mind. I knew I didn’t want any teeth replaced. Several of the front ones were chipped and broken like the smile of an old bulldog. Also the eyes. Poor eye color or setting devastates a mount, to me. A lot of gator mounts have these lime-green eyes like they’d been swimming near a nuke plant. I wanted something darker and more sinister. Beyond that, the bangstick hole would have to be patched. 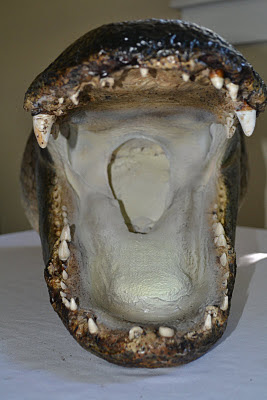 I was surprised to get the phone call last week that the project was completed - with deer season not yet in full swing, he had plenty of time to work on it. I’m very pleased. The hide along the jaws is pretty firmly attached. It’s not like caping a deer where you can easily skin it off and tan. The whole head had to be submerged in a foul-smelling pickling solution. Before this, Mr. Norwood had to cut out as much meat in the jowls as possible. Once it was removed from the pickling solution and dried, insulation was packed into the back of the head and secured with wooden slats. This was then sealed with a black epoxy compound.

Anyway, the mount looks great. My only regret is I didn’t have more of it mounted. The head is certainly impressive, but that alone doesn’t represent the girth of the animal. That’s gonna have to remain a memory.

So it is now proudly displayed in the kitchen, lording over the pantry and scaring the bejesus out of the unaware who come in the side door. Couldn’t be happier. Everyday I walk in and stare at the beast and remember what a great hunt that was. 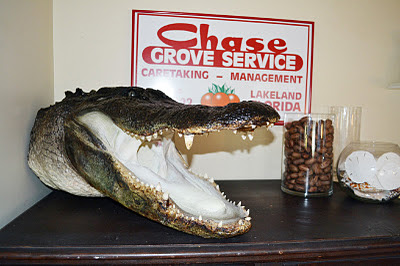 What a great story, Ian! Well, great for us, but not so great for you I imagine. Love the way the mount looks, too. Congrats!

THAT oughta keep the mice outta the pantry!

It's kept my wife from midnight peanut butter runs...

(I may pay for that)

I agree Mounts are a great way to capture memories. They are also a good way to spark a chance to tell your hunting story with visitors to your home. I'm guilty of mounting too many of my critters as well.

The mount looks great!...and great story with it. You sound like you get into the same crazy situations as us!

Very nice (and a bit frightening too)!

I like that you left him with his bull-dog smile too! Says allot (good) about a person who doesn't "fix em' all up."