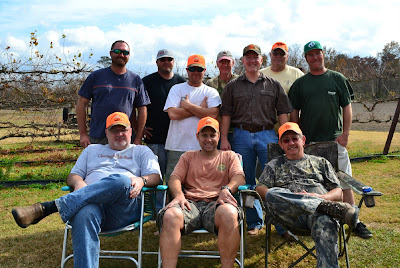 The old doe hung up in the back of a rugged pine clearing, head up and ears forward as her young counterparts fed in the sweet potato pile. Earlier in the morning, I’d shot a younger doe at a long distance that required serious binocular work to ensure I didn’t pop a small spike. There was no doubt on this girl - not at 50 yards, and certainly not with her long nose and nervous demeanor.

My arrival at the box blind that evening had been delayed. I’d not hunted this stand, The Dirty Hole, in 6 or 7 years, and the time fogged my memory for where I needed to go. So, too, my driver's. He dropped me off at a culvert along the road, and I followed a trail until it ended in unfamilar thick brush. It began to dawn on me. Some of the boys had taken an ATV in earlier in the day to drop off corn and check the trail camera - didn’t appear any four-wheelers had been here recently. I jumped on the iPhone and hailed Uncle Dennis; I had been released on the wrong piece of property.

Though there was a heavy scrape along the trail, with looming armed trespassing charges a real possibility, I was relieved to see the red Chevy roll in. We had a good laugh as I loaded into the bed. Turns out, we’d cluelessly shot our mark by a mile. Dennis dropped me back off at a similar looking culvert and trail with an 1 ½ of daylight remaining. This time, the path was obvious and ended in a wooden box blind. Soon after settling in, the yearlings emerged from the thick North Carolina brush.

Both deer were 80-90 pounds, but clearly young. Still, a huge storm system was barreling at the state, and I needed freezer meat. The wind was already switching and the evening had become muggy with dormant mosquitoes awaking for a meal. But, I held off. One deer was a button buck, and the doe clung close to him preventing an ethical shot. That’s when the old doe arrived.

This was our annual pilgrimage to Newton’s Crossroads in Sampson County, NC. It’s more of a family reunion. Most of us have hunted together for twenty years. I grew up with these folks hunting private land in Central Florida. These days, we assemble here from parts as far as Central Florida, Pennsylvania, and Maine. The camptalk is depraved, suitable more for a Hunter S. Thompson novel than civilized society, and hunting takes a backseat to the camaraderie. But that doesn’t mean the hunting isn’t wonderful, too.

The timing of this trip was less than wonderful. This section of the state is rancid with deer, but 80-degree November temps and finicky winds are never great ingredients for deer hunting. That and the rut was on its downside, this coastal area expecting the peak around the end of October through the first week of November.

One beautiful 8-pt was seen and promptly missed by one member of camp. Besides this, one small six and a rugged cull six were taken. Along with the usual passel of does. Everyone saw small bucks – mostly spikes and adolescent four-points. Most came to feed in the soybean fields or bait piles, showing little rutting inclination. The big boys were holed up for the week.

Which is a shame. I’ve long coveted a trophy buck from this area, and there are plenty of them, but that’s how hunting goes. Luckily, there was enough deer activity to make hay. 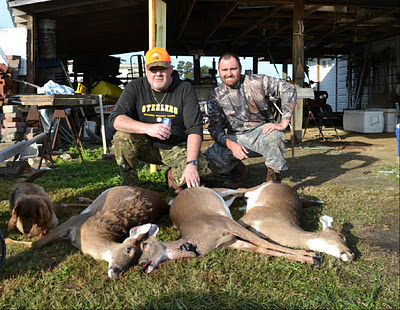 My first doe stood out in a soybean field at first light Tuesday morning. I was hunting the Corner Stand that overlooks 400 acres of soybeans with fingers of oak and pine running through it. Over the years, I’ve killed a lot of deer here, and a big buck was spotted three weeks back at last light a mere 20 yards from the stand. Monday night, I’d glassed through a trio of spikes, the smallest antlers not even visible by eye at 100 yards. I nearly cranked him down but luckily a 40-pound runt fed behind him preventing a shot. Then, one last look through the binos revealed those thimbles on his head.

So I was hesitant to let loose in the thin light of the next morning. As the deer fed 150-175 yards away, two of the spikes from the previous evening ghosted into the sweet potato pile gnawing like rodents on the orange tubers. One was a large-bodied deer with long spikes; he clearly lacked the age you’d want with a cull, though. With luck, I’ll catch up with him again in the coming years.

As the light increased, I realized that first deer looked more and more like a doe, and I became confident that she wasn’t that miscreant from the evening before. The morning wore on and she would soon tire of feeding in the open. It was early in trip, and the freezer begged for backstrap. I rested my Savage .300 Win Mag on the rail of the ladder stand and planted her in the field.

After that, the pressure was off, so I wasn’t in a hurry to take any dicey shots at the Dirty Hole. The old doe slowly crept from behind the brush, feeding on browse and leaving the bait for the youngin’s. Soon, a good-looking four-point strode in. Enough daylight remained that if I could grab a shot, I’d take the doe and hope for more action after. She’d just have to give me a window.

I leaned my Savage out of the portal of the ground blind and tracked her in my scope. Ever careful, she slowly slipped to a gap that’d allow a clear shot. I took one last careful look around to make sure no other deer had appeared and settled the crosshairs of the Nikon behind her right shoulder. At the shot, she head-plunged into the Thick; the four, the doe, and the button buck springing like quail in every direction. 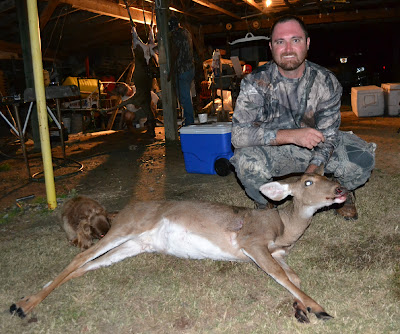 The last minute of legal shooting hours expired before another deer showed. I’d crawled out of the stand and saw a dark silhouette on the edge of the clearing. The deer stood like a statue, surveying the area as the Honda rumbled up before finally disappearing back into the woods.
Posted by Ian Nance at 11/21/2011 05:48:00 PM

I know I've told you before but I just enjoy the heck out of your writing! (planted her in the field- awesome! lol!)