Most folks with basic cable and even a passing interest in crocodiles and alligators have probably surfed onto the Discovery Channel or Animal Planet and learned what the “Death Roll” is. The lizard grabs its prey and spins furiously trying to tear apart the creature trapped in those jaws. The result is a thrashing, roiling dance of limbs, tails, and blood until the croc or gator submerges into the muck with its meal and the water calms to bubbles as the startled shore birds return to the water’s edge like nothing had happened.

FYI: They also perform this savage stroke when hooked to two snatch lines and a harpoon; it’s much more furious in person.

By Wednesday we’d spent three long nights pursuing these reptiles with very little to show for it besides frustration. We’d gone from a night of a dead battery and rain, to a couple evenings of failing to get within casting distance of some nice gators with the snatch hooks. I was openly wishing we’d done things different - scouted more, maybe rig up some rotten chicken to bait them in range, or something to improve our luck. I figured we could iron out these wrinkles during the down time between the 1st phase and when the general season resumes. Still, I thought, it’d be nice to knock out my tags before this opening week expired; deer season is coming too fast to worry about gators in the next few months.

The first gator we hooked came an hour or so after sundown. We’d been cat-and-mousing two gators near the boat ramp for forever. The first, a 7-8 footer dock gator that we’d spied while launching the boat, wouldn’t move very far, putting just enough distance between us each time he submerged. And despite our best efforts to pole and then anchor within range of where he’d sounded, the sharp winds from the remnants of Tropical Storm Ana that passed over retarded these plans. Every time we thought we’d be in position, he’d pop up too far away, or at an angle where throwing the snatch hook against the wind would limit the range. A few times the hooks plopped just shy of his head, adding to the tension on the boat.

After a while, the gator quit playing. Darkness had arrived early thanks to Ana and her clouds. By now, though, all thoughts of calling it an early night had been snuffed out by the rush of the hunt. We’d been keeping an eye on a slightly smaller gator in the distance making a run for it across the lake. We pursued at paddle or pole speed until he disappeared, and we were left shaking our heads. We had, however, wandered to a portion of the lake with a little back bay shielded, in large part, from the wind – and a half-dozen sets of red eyes staring back at the Q-Beam.

I think the first time I really appreciated the temper of any alligator was when this angry sucker snapped down on the side of the boat, unclenching it after a few moments. It didn’t harm the boat, but you would have lost a toe. He wasn’t any leviathan, but there’s no mistaking the hostility in that face: eyes red in the light, jaws half agape, flashing those sharp pearly whites at anything that got close. Though he was what one would call a “meat gator," this guy was nothing to be trifled with.

Tough as he was or acted, the harpoon and a knife behind the skull snuffed out his flame. We taped his jaws and hauled him aboard amid some high-fiving and handshaking. As the saying goes around hunting camps, putting that first deer or turkey of the season on the ground, “takes the pressure off." Though no trophy, we were in a celebratory mood as I affixed the white CITES tag and the boat pointed home.

Back at the ramp, we were preparing to unload and call it an evening. We had one tag left and could use it in any number of places to find a trophy. We also had a couple nights left before 1st phase ended. But we couldn’t help ourselves. Had to take one last flash back with the Q-Beam – and there was our nemesis from before, the dock gator, not having moved fifty yards from the last place we saw him. The boat was shoved back off. I’m certainly not going to be one to let opportunity slip by.

By now, the wind had died and few small ripples crossed the lake. Our confidence had been restored, win or lose this match. This time the gator played by the rules, staying surfaced in the glow of Harris’ headlamp as he flung the snatch hook perfectly across the reptile’s back, gripping in the side. Immediately we knew a different beast pulled on the other end. Again I stood by to insert the second hook and Cole maneuvered the boat around to keep us from being cut off.

It was after the second hook was impaled when the Death Roll started. Hovering vertical in the water, the gator spun with fury beside the boat. Someone stuck him with the harpoon and all three lines wrapped around the gator, creating a gigantic mess, one that would probably end with all the lines breaking. He had to be dispatched in a hurry; however, at this angle and with the enraged action, Harris had no shot with the bangstick. I held both rods hoping to keep him surfaced. Finally, Cole reached out with the paddle.

With a sharp report, the gator chomped down on it as Cole lifted him horizontal and Harris touched off the first shot, instantly calming down the creature. A second insurance shot was added, the mouth was taped, and he was hauled aboard. A hair over 7, he wasn’t much longer than the first, but definitely sported more girth and a stink that few municipal dumpsters would match. My 2009 gator season was over, just like that. 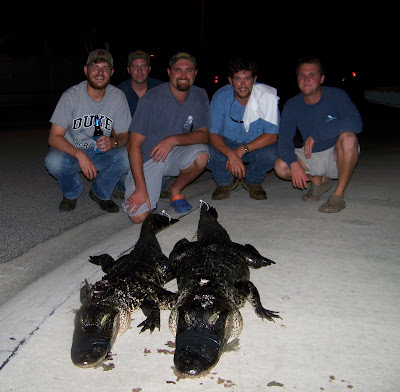 Back at Cole’s, we celebrated with late evening drinks, took pictures, cleaned the suckers and the boat, and bagged up all that wonderful meat, a fitting end to this style of hunt. It’s a team sport, much like offshore tournament fishing. Gotta be able to communicate, know your role, and get out of the way when necessary.

As a game animal, alligators are worthy adversaries, something I very much doubted when this whole process began. One day, I’m looking forward to bagging an old scaly beast that’ll give you nightmares. They are out there. Would love to have a mounted head for my trophy room – nice to have goals!

A few of the guys assisting with my tags just got word to me they tagged an 11-footer Sunday night on a second phase tag. The bar has been raised, I have a season under my belt, and I’m ready to apply next spring. Hopefully I will be drawn again - may approach things a little different if I do. One way or another I’ll be back out there. Chasing gators will get that hunting instinct and passion alive in any sportsman.