My first deer of the 2008-09 season I spied from the truck while bumping down a back ranch road in Sarasota County one early evening. She fed in a food plot, oblivious to the dual exhaust and hip-hop bass blaring from the Dodge. I parked the truck and slipped up a ditch bottom, using overgrown dog fennels and palmetto bushes to shield my approach. Broadside and 20 yards away when I drew back, this was the deadest deer I’d ever seen, and I’d started thinking of Venison Piccata when I got home.

Instead, the Grim Reaper-tipped Easton ST Epic skipped off a strand of barbed wire, up and out of the strike zone. Gone.

Would-be deer Number Two entered from the corner of a soy bean field in SW Georgia. An old, gray, nervous doe, she hung up in the tree line around the field watching her nearly full-grown, soon-to-be orphaned offspring eat the man’s crops. She finally paced into the field, broadside at maybe 15 yards and began feeding. She’d eat real nice, considering a summer’s diet of soy bean.

Instead, as I shifted my weight to draw down on the doe, the foot rest emitted an awful creak as any bolted metal would from being left ill-maintained in the elements for nine months. She whirled around back to cover, stopping suddenly and just long enough to sail an arrow over her back and into the Peach State clay. Gone. 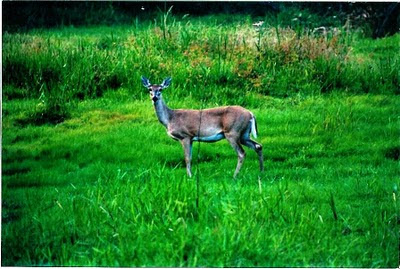 My girlfriend, Carolyn, makes this guttural groaning noise whenever she’s frustrated, or I laugh at a fart joke. It goes like this (put your ear close to the computer and you can hear it!), “ugggggggghhhhhh." I hear it quite often, but quite often mimic it when discussing bowhunting.

So, my bow season is off to a poor start. Actually, I shouldn’t say that. I spent a week in Georgia hanging stands and seeing plenty of does and coyotes, and sandwiched that hunt between two trips to a private ranch in Sarasota County for an extended bachelor party for my good friend, Travis. And I popped a few pigs down south with my AR-15 on down times between stand hunting.

What’s kinda neat is how different each hunt was. In Georgia, the rut was still a few months away – late November, early December. The bucks are invisible this time of year to anything but trail cameras and headlights. I don’t even expect to see antlers until that time. Daylight shy, too much hunting pressure, who knows, but that’s the way it’s been since I took to leasing property there a few years back.

Now, down in Sarasota – in Florida’s South Zone – the bucks are nearly ready to Rock the Casbah. This last Friday morning I awoke from my pre-dawn stand snooze to see a beautiful chocolate-racked 6 point standing in the wide open of a sod field. After years of hunting the dense cover of the Southeast, catching this buck idly standing out for the world to see was a bit like when the scientists saw their first dinosaur in Jurassic Park – just something you don’t see every day.

He eased his nose to the ground and worked back to thick cover, never coming closer than 80 yards or so. Several minutes later, a small seven and a smaller five followed the same trail, noses desperately trying to sniff out some sign of early morning delight.

On this ranch, only mature deer may be harvested. This six seemed to fit the bill. His shoulders were broader than his followers; the rack had mass – for a South Florida buck – and was easily past the ears, with long G-2’s.

Dirty J, who’d also seen the bucks from a ground blind not too far from me, spent the remainder of the morning scheming with me on how to get the drop on that six. We could move the stand, set up another ground blind, use some doe urine and grunt calls and lure him in. It all sounded real good, but the weather got hotter, the wind began swirling, and everything quit cooperating. Been nice to get a shot. Hope someone does; he’s a nice deer.

I did have one last opportunity for some venison. That Friday evening I returned to where I’d seen that buck. As I parked my truck, two does stood, again, out in the open. Without spooking them, I’d hit the tree line and figured I could stalk through the dense cabbage palm island and out to a pine tree surrounded by tall palmettos, well within bow distance.

I worked my way through pig trails and banana spiders, popping out once in a while to check on their position. I got oh so close when I felt just the tiniest tickle of breeze on the back of my neck, and I knew it was over. The wind had shifted out of the East and blew my sweaty stink out into the field. Predictably, they high-white-tailed it.

With a rifle, in theory, I could have the venison piled high already. But that’s the challenge, and eventual satisfaction of bow hunting. I have several more bow hunts this season before I gladly set aside the PSE for a long gun. Maybe I’ll eventually connect tag a buck or a doe with the stick and string.