By 10 p.m. August 15th, the first day of gator season, our crew was huddled under an expansive oak branch in a Banana Lake canal trying to stay dry, waiting for rescue. A bad battery stranded us in this mosquito-infested misery, surrounded by thunderstorms, and dreaming of hot food and strong drink.

It’d been a long day.

Let’s make this short and sweet since I don’t want to re-live all the pain. We hadn’t done a great job at due diligence in any aspect of this day, and it was chomping us in the butts. My permit is valid for any public access body of water outside of city limits. There are hundreds of such lakes in Polk County, yet we had difficulty getting into any of them. Lake Lowery and Lake Van east of Lakeland – private ramps. Vociferously so, too. Some ramp punk chased us away from the former, a loud sign from the latter. The lakes looked promising from Google Earth. Guess a phone call would have helped.

We tried Lake Buffum between Ft. Meade and Frostproof. Family friends live on this lake; I know there are some dinosaurs out there. The ramp was closed due to low water levels. Naturally we tried anyway. For gosh sake, we’re not dropping a pontoon boat into this slime; the shallow draft duck boat powered by a Gator-Tail surface drive mud motor should have no trouble scooting towards open water. Wrong! After jumping the dead battery, we unloaded the boat, but with four people aboard it wasn’t going anywhere in 5 inches of water.

We shoved the boat back on the trailer and shot over to Lake Hendry, quite literally a sinkhole amidst orange groves and a house with one large rottweiler. The ramp was superb, and the lake looked reptilian. Heck, the motor even cranked up first try. But, a storm blew up, the lake got choppy, and we didn’t see a thing. And if the dog had all four legs, what we were looking for didn’t live here anyhow. 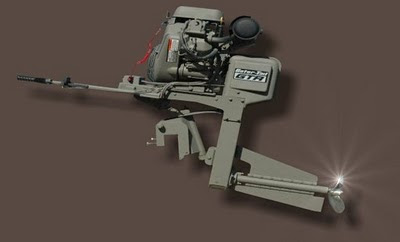 So, we shot back to Lakeland and Banana Lake, our fall-back plan. There have always been a ton of gators here, and there is an awesome ramp facility. But we just weren’t seeing any reptiles.

That first night ended poorly, no doubt. We entered the canal on the north side of the lake and spotted one set of eyes which sank fairly quickly. We shut the motor down to wait him out, but the Q-Beam grew suspiciously dim. And that brings us back to the start of my story.

It was arrogant and ignorant to suggest alligator hunting would be some walk in the park. They are much sharper than I gave them credit for, that’s certain. Spending the last several days chasing them around various lakes trying to put a snatch hook over one’s back, I’m reminded of similar hunting frustrations. Having a buck linger just out of bow range. Watching field gobblers strut in the open, paying no mind to decoys, and everything about ducks that doesn’t end with them floating in your spread. Honestly, I’ve been hunting far too long to make such an amateur assumption; I don’t know why I thought it would be so easy.

There would be no hunting on Sunday. At dinner that night I related this story of woe, and added, “And you know what’s really stupid? I’m going back out tomorrow night,” to which most present agreed was stupid.

Monday night we skipped the running around Polk and just hit Banana Lake. Back in our Lost Canal, a decent gator pushed a surf-able wake into a No Motor Zone. As Q-Beam time came we slipped through the two pits on the west side of the lake. Immediately we found those glowing red eyes, but couldn’t find a way to pitch a rig over its back without the gator sounding. As I understood it from Harris, the trick was to race over to where they had submerged and look for bubbles from as they kicked along the bottom stirring up the rank mud as is a common tactic on Lake Hancock, a popular gator lake for which my tag is not eligible. But nothing. Maybe the substrate is sandier at Banana Lake, who knows, but not once did this work.

We attempted a half-dozen different tactics to get within range of some sizeable lizards. Race up on the gator keeping the light on their eyes. Wait for them to sink, pitch to that spot and hope for the best. I even offered SCUBA and a Hawaiian sling. All I know is they were on their game. They seemed like pressured animals. Never hard to tell when a population of any game animal is influenced by hunting. Our shenanigans certainly weren’t helping the situation.

On that note, until my typed words are financially compensated, and I’m therefore compelled by professional integrity to divulge the locations of certain successes, I’m going to pull the ol’ hush-hush move on Tuesday’s lake destination. Sorry. This place had the ramp and plenty o’gators. Again, we gave it our all. We tried to set drifts with the wind when we spotted a target. The Q-Beam was ditched for a headlamp, and we came oh so close on a couple of tries.

My morale was at an all-time low heading back in Tuesday night. We’d found gators, but just couldn’t close the deal. These nights get late scanning the waters, swatting skeeters and mayflies. One time while manning the Q-Beam on Banana Lake, I dropped a defensive maneuver on a bat that screamed in too close chasing bugs in the light.

For me, it’s been a unique experience. The summer nights on the lakes are wild. Gar, Plecostomus catfish and baitfish would rise into the lights and birds screamed on the bank. Love it all, but I wanted a gator.

I will tell you this - I have a new-found appreciation for this sport. Heading out on Friday I figured we’d tag out in a couple hours and could select a trophy and a meat gator. Hubris. Instead, it ended in a pouring rain trying to push a dead boat onto a trailer, gator-less and with a pulled groin from slipping on the slimy algae on the ramp. Wonder if I made any bubbles?
Posted by Ian Nance at 7/15/2010 08:30:00 AM

Great site your an excellent writter!
I took Gators two years in a row from Hancock.
I put in for the practice draw but missed deadline for the "real" draw this year.
Didn't need to spend the money anyway.
Check out my site I have some nice Gator heads posted.
Matt

Thank you, thank you. Here is Matt's website for the curious. Check it out!