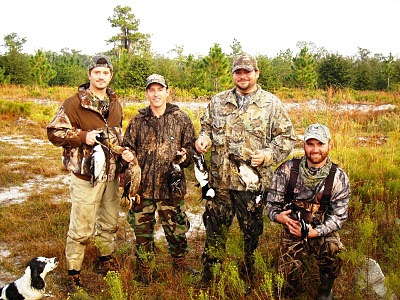 The wood duck couple scooted about the retention pond feeding in the muck weed for what felt like 30 minutes. These were the only two that settled in after having numerous others buzz the tower, hopes rising and falling with their passing whistles. Don’t know why more didn’t land here Opening Morning, but it was common wood duck action. Very early, very quick.

Of course, we didn’t use any decoys or blinds that morning either as it was more of an exploratory mission than anything. Previous scouting uncovered ducks using that pond regularly and there was no real point in spoiling the scene – either they’d be there or they wouldn’t, you know? In hindsight, we maybe could have used one or two dekes, but I’m satisfied with our decision overall.

I was caught off-guard staring into the horizon trying to pick out a flock of ducks that wasn’t there when I glanced back at the drake who had launched himself towards me. The first shot was a tad off - enough to spin him around for the second. Jim downed the hen to prevent any broken hearts or Juliet suicides. Beautiful birds, those woodies.

And that was it for me this first duck season phase. The rest of our hunting party – hunting private land outside of Lakeland – scratched down a couple more wood duck, a few hooded mergansers, and a couple feral mallards. Not a bad morning.

But, as has happened with my deer season, previous obligations prevented any more forays afield and stream for ducks; however, I’ve kept my ears to the tracks and give you a rundown of the duck hunting gossip so far.

First, the FWC published their 2009-10 harvest reports for the first phase. Just eyeballing the data, blue-wing teal look to be leading the list – mostly in the South and East – with ringers a close second. Mottled ducks and green-wing teal make an honest showing with a smattering of widgeon, woodies, and ruddies in the mix. Not too bad.

As for public lakes not on this list? Friends tell me ringers were the duck-of-the-day. Know a drake redhead took the plunge as well as some teal. Hunting and shooting was spotty at times, and a few lakes had an armada of boats on them, but that’s Florida duck hunting, the best I can describe it.

Still, I get the general sense that this is going to be a successful year for many waterfowlers. Second Phase began December 12th and runs to January 31st.