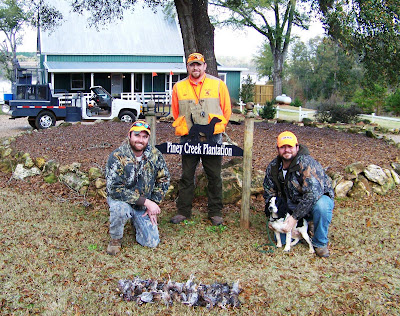 My single most embarrassing maneuver of the morning was lining up on a sailing quail and hearing the firing pin slam an empty chamber as the ladies in the buggy snapped digital photos of the covey rise.

“And, in this picture,” Carolyn said later, “is where you didn’t have a round loaded.”

I’m a boob. And in front of the guide, too, whom I thought I might have been impressing with my wingshooting acumen. That and not pulling the trigger on low-flying birds that could harm his very expensive dogs. “You shoot 'em, you buy 'em” was the motto here, and, Lord, do I not have the pennies for that. This blunder was good for a laugh, however, and earned reminders to load my gun as we approached every other point.

For a spell afterwards I went into a funk, whiffing on birds that flushed too close and zipped from right to left, pulling my cheek off the stock and sending the wad and lead through their vapor trails. I ended the day on a high note, though, downing my last two birds on consecutive shots. All in all, not a bad outing on my first Georgia quail hunting trip. 31 total birds in hand, and plenty more left in the bush.

We hunted Piney Creek Plantation in Dawson, Georgia. Our group consisted of Carolyn and me, her brother, Houghton, and his wife, Tiffany. We stayed in the company of Carolyn and Houghton’s aunt, Emily Williams who breeds and trains English Cockers and other bird dogs in Albany. The weather was gorgeous, property beautiful, and our guides Bill and Sonya easy, knowledgeable company. All in all, it was an A+ event.

Knowing what I know about the quail hunting business, I expected the picturesque cabin, manicured and managed land, and the fantastic guides; I didn’t expect how much I would come to appreciate the art of the dogs. Though I’ve seen dogs run deer, catch hogs and retrieve ducks, this was a totally new experience. The training and effort afforded to these animals to produce this service must be immense, and I aim to learn more. 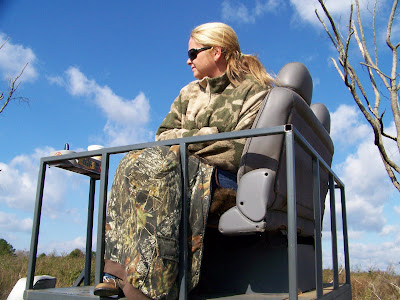 We hunted with a combination of English pointers and German Shorthairs with the Cockers called in to flush and retrieve. And they knew their business. I’d long read of the majesty and professionalism of these animals, but it took witnessing it firsthand to really admire this style of hunting. Words really fail me here to relate the poetic pageantry displayed by these hard-working, enthusiastic animals. You just kinda have to see it. One dog, an English pointer, Dan, held a point for at least five minutes as we searched for him among the tall broom sedge. I don’t think so much as a leg quivered as he waited for us bumbling hunters to come claim his prize. Luckily, I didn’t waste his patience with a miss.

Other birds were more fortunate. Houghton was dealing, and I held my own, but when you’re hunting animals that blend perfectly with the terrain, the unexpected flush as a covey is being busted will throw you off your game. Even when you know it's coming doesn't mean you won't eventually shoot stupid.

Case in point, we’d – I say “we” when I mean Buddy, Yancey, or Pearl, the flushers – jumped a covey of maybe a dozen birds. To my right and behind me, a lone hen flushed wild. I whirled around in a corkscrew, completely off-balance and way-laid plenty of vegetation. Had this been a British slapstick comedy, I’d spun in a complete circle until I fell to the ground, shooting as I hit the flat of my back. Then the birdshot would have rained down on me. Surprisingly, it didn’t come down to that.

But, man, those dogs. Rock solid. And the birds cooperated. These were released birds, no hiding that fact. Maybe I just don’t know the difference, but they fired up like rockets and vacated the premises with extreme prejudice. At one point, I dumped three in a row – in full view of everyone – as they zoomed out of a patch of corn stalks. How the dogs found them in that mess is beyond me. It’s just what they’re bred to do, I suppose. And I got a couple kudos.

Bill was the man, and his reputation with me didn’t just get lucky with a fruitful day of shooting and nice weather. I’ve been around quite a few hunting and fishing guides – not all are as accommodating. After my brain fart with the empty chamber, I swung on another bird I probably could have scratched down, but I’d lost my bearings on where the buggy was thus neglected to shoot. Turns out it wouldn’t have been within the scope of my swing, but he still offered a pat on the back for not firing. Know plenty of Gung-Ho’s who probably wouldn’t have. Of course, I’m sure he’s seen it all. Competence comes in many forms.

He carefully maneuvered Houghton and me to be in the best position for a shot. I don’t know what all the whistles and commands meant that directed the dogs, but they sounded good, and, as I said, the dogs performed admirably. Houghton, by the way, gets the award for completely stripping the most birds of their feathers. I couldn't hit those that flew too close - try it before you comment. He made it look routine, and as an added bonus, most these victims hit the turf already plucked. Looked like he was blasting snowballs.

After we’d secured the shotguns for the day, we meandered around the property near the lodge. In a timber pit behind the cabin, mallards swarmed down to the water, exciting this wannbe duck hunter. Told Bill it was giving me heart palpitations and he laughed as we said our goodbyes when a mallard quacked down on the pond and I instinctively cracked my head around to catch a glimpse. He knew quickly I’m eat up with this hunting stuff. 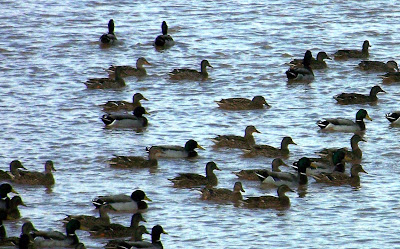 I don’t know much about quail hunting - not sure how to write about it to do the hunt proper justice, to be honest with you. You ride in the buggy until the dogs go on point, hop out, load up, walk to the pointers slowly, then put the flushers on the covey. Your only real job is to try not to vomit awful shooting all over the place. That's the cheat sheet. Actually doing it has to be experienced.

Over the years I’ve traveled many a weary mile to Georgia and back for deer – I’ll tell you what, I wouldn’t hesitate to pile more on for these bobwhite at Piney Creek.