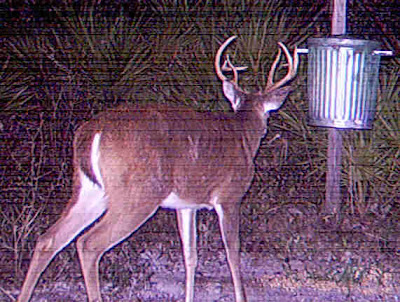 I wish there were a way for me to gain some measure of reprisal against Mother Nature for sabotaging my deer season. Simple air pollution from my 10 MPG Dodge Hemi isn’t granting enough satisfaction. I may have to step it up a notch, perhaps lighting a tire fire and exploding CFC- infused spray paint cans in the melting black rubber while donning a baby seal fur coat. It’d be a start.

She’s paralyzed and put in real jeopardy my four-year streak of harvesting at least one decent buck, somewhat remarkable for a guy without his own TV show. Heat, rain, fog, wind, late acorn crop – She’s Shanghi-ed me this year.

Case in point, my last trip to Levy County in the Rosewood area. With the high deer population in this region, and hunting private land, I figured I’d get at least a shot at one of those scraggly scrub bucks. Heck, Mike had been e-mailing trail camera pictures of a certain pair of bucks for weeks now.

A Cedar Key buck is high on my list of trophies for the wall. They are comparatively little deer, even going shoulder-to-shoulder with the average Florida buck. But, they are attractive animal with a distinguishing contrast between their auburn hide and bright white throat and underbelly markings.

Anyway, the trail camera pics drew me to this stand and my plan was to somehow sidle my way into this area, which I accomplished. Yet, a cold front was pushing south on that Friday evening. A sharp, wet Northeast wind cut through me like no cold has ever done. The drizzle, lower 40’s - I gave it my best, and huddled there til dark with nary a glimpse or hopeful thought of whitetail. It took me two hours, a campfire, a rib eye and baked potato, and copious amounts of bourbon to lift my body temperature back over 90.

Saturday morning I posted up at the so-called “Stuart Stand”, a beautiful area with a cypress swamp to the left, and palmettos and small planted pines ahead and to the right - killed an 8pt here last year. Temperatures were in the mid-50’s with a light sprinkle. Not ideal, but a workable deer hunting scenario.

Maybe a minute past legal shooting light, I looked up from the latest baseball trade rumors – thank you, Verizon and Al Gore for making the Internet accessible by phone in remote areas – and spied three hogs milling under the feeder. Didn’t really want to pop one under the guise of deer hunting, but already the precipitation had increased and the wind began to whip around. Plus, I knew the guys wanted as many swine shot as possible.

I rolled the middle hog, a young, corn-fat boar as they beat a retreat back into the swamp, dismayed the feeder had not yet gone off. I regretted not being able to tag a second pig as it scurried across the open – didn’t even fire a shot as it put its front feet between its back and burned towards the sunrise.

Now where are you, Mr. Buck?

Still don’t know. Mike picked me up at 8, mercifully. The rain became too much. I don’t mind hunting in a light rain, but when it’s down-pouring, forget it. Not this far after the rut with a swirling wind.

We got back to camp and the sausage and bacon. If you’ve ever hunted in the rain, you know exactly how I felt at that moment to change out of wet camo and digest some greasy pork. After breakfast I pulled up the radar on my phone. Streaking from west to east, like skidmarks in the underbritches of the South, was a frontal boundary that had stalled over the upper third of the state. It was warm, but cloudy to the south; cold and clear to the north. I guess what happened was, a cold front moved down, but was pushed back up by warmer air coming from the Gulf. We were caught in a soggy limbo. By Saturday evening, the temperature had risen to 75. In case there are Southern Californians reading this, this is what we mean when we say if you don’t like the weather in Florida, wait 10 minutes and it’ll change.

But change into what? It got warmer, but the rain barely relented. Saturday evening, posted back up in the Stuart Stand, was a wash. Literally.

Morning 2 showed promise. The sky had cleared; you could actually see stars and the moon. There was hope! There was talk of the deer moving this morning!

Then Lucy yanked the football away. Soon after sunup, a dense sea fog pushed in from the west. Visibility rapidly declined as the morning progressed, though once again, I did manage to pop a pig.

Quick thought on the hogs for those of you who think I may sound too whiny or morose. They are an eat-everything, destroy-the-roads pestilence here, as they are in other portions of the state. The landowners want them gone. While I really want a deer, I’m obliged to assist when I can. In some situations hog hunting is very sporting and I love it; here, it’s nuisance patrol.

Actually, I will say the swine served as something of a moral victory. In these elements it’d been a cinch to see nothing all weekend, as my father did. And in the end, by ridding the property of a couple porkers, I actually helped out Mother Nature.