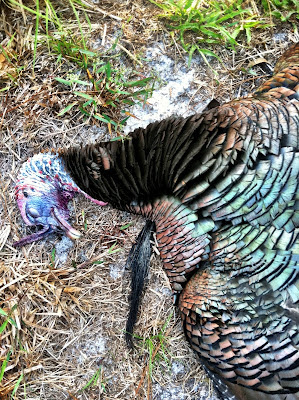 Having a fresh turkey tale really improves my standing with others at parties, at work, or in the community at large, I feel. I enjoy the rarified air. Start to feel like a real loser when I have to dust off the photo album with pictures of gobblers past as others whip out their iPhones and entertain the crowd with recent accomplishments. Would love to bust three or four birds each year, but, you know, time is short, weather is fickle and turkeys are crazy. It looked like I’d be stuck with the 99% for a second season, but luck finally prevailed.

And, man, was this lucky.

Dad and I drove up to Rosewood, FL near Cedar Key for our annual hunt with longtime hunting buddies. They own 80-acres of game-rich Levy County property. Hogs and deer run rampant. Turkeys, too, but they generally hang on a neighbor’s land.

It’s been a long season for me, hunting the nearby Green Swamp WMA and my own little lease that is home to what I can only assume are ghost turkeys – hazy apparitions that trigger the trail cameras and leave tracks but long ago converted to dust. It’s been frustrating. The weather has been so warm for so long the gobblers just about played themselves out by the third week of the season. This was the fifth of six weekends, and I was about played out, too.

So it was with severe reluctance I even got out of bed Saturday morning. Not having to wake up to the twins, the lure of uninterrupted sleep was mighty powerful and partially responsible for how the morning progressed – might as well get up to sleep in the woods.

As I said above, this land is loaded with hogs. I needed one for the freezer and a couple buddies did, as well. The guys erected new box-blind treestands last fall with cushioned office chairs. Sure beats catnapping on an oak root. I left my shotgun and turkey vest at the cabin and grabbed Dad’s Ruger No. 1 .25-06, a facemask, gloves, and a HS Strut Split V II mouth call, just in case. I’d go camp out in the stand, hope a hog showed at the feeder, and maybe hear a distant gobble to pursue.

Sadly I never fell back to sleep. The Spring Woods are just too exciting for proper rest. A doe showed up near the feeder around sunrise, though the swine never did. Birds chirped, owls hooted, but not a single gobble on the roost, leading back to my theory of the toms having called it quits for the year. I had actually just got done texting that very thought to a friend when I heard one lone bird in the distance.

Figuring that would be my only playable lie, I slothed out of the stand and down to the border of a cypress swamp and a pasture, finally donning my facemask and gloves in semi-earnest prep for a turkey. He'd have to come a long way to visit me within the confines of the property, and really, I had no reason to believe he would. I plunked down under an oak and half-heartedly called a couple times without a response.

After 30 minutes the butt cramps were setting in, and I was getting squirmy. I pulled out my phone to check baseball scores and just happened to look up to catch a gobbler streaking like the Roadrunner into the pasture. I'm pretty sure he was the bird I had heard and could have popped him at 150 yards with that .25-06 but gave him a few soft yelps. He made a 90-degree turn and ran right at me. I lost sight of him as he trotted behind a cluster of myrtles and deadfall. Certainly he’d break around either side of that, and I’d have a clear shot.

But he never appeared. After what seemed like 10 minutes but probably wasn’t even 1, I purred twice. He let out a gobble that about crippled me. I was so busy paying attention to the edges of that brush pile that I failed to see him walking through the middle of it. And without decoys, he hung up in there, surveying the situation. With that last call, though, he emerged from the tangle and stepped into the sunlight in full strut. I carefully adjusted my aim to the base of his neck and tagged him at 20 steps. His beard taped out to ten inches even with one inch symmetrical spurs. Just a beautiful Osceola taken on what was quite possibly my lamest efforts at turkey hunting. 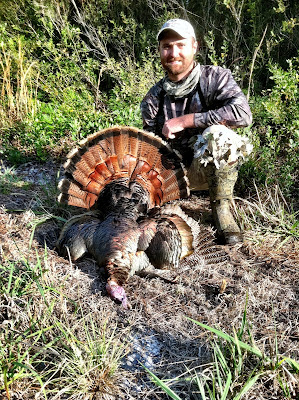 But that’s how it goes sometimes. After mornings and afternoons of strategies, burned boot rubber and more than a few pity parties – I actually told Carolyn that I didn’t think I’d ever shoot a turkey again – bumbling luck paid off. It’s as They say, you can’t kill them on the couch.

I did sleep in Sunday morning. Everything worked out like I planned it.

Congratulations. Hansom Tom. Had to look up that cartridge.

Congrats on that nice looking gobbler! Our season opened last Saturday...and I am still patiently waiting for my turn to shoot

What an awesome story and a kick-ass bird to boot! Congrats on a job well done Ian!

Awesome bird and story, too! Has to feel great ending an interesting hunt like that. Great job, Ian.

Congrats! Glad to hear you got one!