I’m in the throes of a Hunting Funk. Like when your nose starts itching before a major sinus cold, I recognized the early symptoms. The first sniffle occurred when the nock of my arrow fell off the string while drawing back on a doe in January. The first sneeze was when I sailed a Rage over the back of another doe later that evening. By the end of duck season – after two hunts ended with crashing thuds – I had a full-blown case of Funk-fluenza. 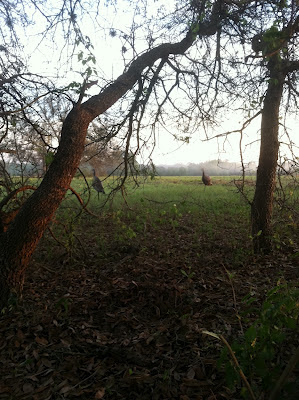 My wife has noticed this affliction. Can’t say it pleases her. She’s made a lot of concessions to help me navigate through this malady. And, yes, she is correct – I’ve had opportunities to leave the house and the twins to enjoy the chirping birds and sunshine and all that crap, but she can’t quite understand the underlying issue.

The major trouble with the Funk is the associated feelings of failure. Take buck hunting. I’ve been Buck-Funked since 2008 – I know the reasons why. I shot a young six-point on my last day of hunting in Georgia that season. I recognized then the Hunting Gods would take it out on me, and I shouldn’t be surprised. Still, three seasons later, it’s like I’ve completely forgotten how to hunt deer. Never mind the odd weather patterns, weird acorn harvests, and general challenge in trophy hunting - I blame myself, mostly.

And as far as incompetence is concerned, the coyotes have sat me in a corner with a dunce cap on, once again. This new lease I’m on is LOADED with coyotes. It’s as if some strange, vindictive organization trapped them with rocket-propelled nets - like the NWTF does with turkeys – and released them on this 140-acre plot. Everyone – except me, naturally – has dozens of pictures of song dogs on their trail cameras. I spent the better part of February trying to call one in without even convincing myself a blowing shrub could be an incoming predator.

Again, it’s the feelings of incompetence and inadequacy that is the worst. And I write, now, for actual pesos. There’s a self-imposed pressure. I like to have fresh success stories to share. Furthermore, I prefer to sound like I know what I’m talking about and have actual real-time proof that I do. When I don’t, it’s sometimes a struggle to whip up something. Then, every time I have been able to arrive at a topic, I go brain-dead at the keyboard. It’d be similar to a mechanic who’d spent the better part of a week repairing a vehicle - with a great deal of difficulty - suddenly forgetting how to start the car and drive it out of the garage after he had finished. The Funk.

Heck, I conjured up this idea while turkey hunting this morning on the aforementioned lease. There aren’t many turkeys here. I think when they imported the coyotes, someone else exported the turkeys…wait, maybe I can do this math on my own…

Anyway, Dad and I scouted the land a month ago and found gobbler tracks on a road bordering a field of new-growth grass and the neighboring orange grove. Looked like a textbook set-up for strutting action. I scattered corn here and checked it last week and spied more gobbler tracks. The excitement began to build.

Obviously I didn’t hunt over the corn this morning rather set up under a stand of scrub oaks at the highest point of the property to listen for gobbles. The land doesn’t have natural roost trees, as you would normally think of, but you never know what may happen over the course of the breeding season. Plus, it hadn’t been uncommon to discover hen tracks over the last month, either. I surmised they roosted off our lease but would wander over to feed in the mid-morning.

Well, 10:30 arrived and my back was over the sit. I had not heard a thing, so I decided to sneak down to glass the corn pile. The “gobblers” were there.

I’d never considered sandhills would eat the corn. Nor had I ever taken the time to learn the distinctions between a gobbler track and that of the Almighty Crane. They are roughly the same dimensions. The sandy soil would’ve made it difficult, and it's not like Sandy's have a fifth toe to betray their hoofprints. I suppose I should have placed a trail camera nearby and saved myself a morning of personal embarrassment, but, you know, I’m just too busy trying to photograph my first coyote.

So, yeah, with that level of hunting acumen it is likely turkey season doesn’t blow me out of the doldrums. But there’s plenty of time left, and, eventually, I’ll run into a wild hog.

Hang in there bud. You will fight yourself out of this mess!

Could be worse. We won a room paint drawing at a hardware store grand opening and purchased additional paint. 8 gallons so far; enough to carry me through last fall and winter. Teething and hunger pains erupt nightly with our youngest daughter. I guess these are just seasons of life. Looking forward to butterfly and toad season.