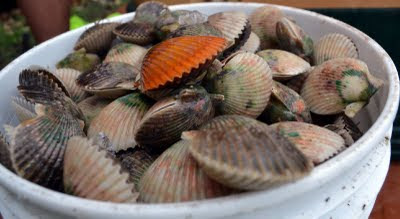 The majority of the scallops in the Hernando/Citrus County area appear to be off Chassahowtizka Point and south. Reports from Ozello and Crystal River are grim, and only scattered scallops around the Bird Rack and out of the mouth of the Homosassa. This reflects the FWC’s reports of fewer clams in this area with higher numbers down towards Hernando. They are usually pretty accurate about such things.

Opening weekend we hit five gallons – so half the limit for the number of folks on board. We started off in deeper water off Chazz, but decided to head towards the Bird Rack so the ladies could swim. The scalloping was decent, just nothing to write home about. If you aren’t finding 2 or 3 in a group, something is amiss.

And that’s how it was that Saturday. Pick up a few here and there. Stop and check a half-dozen spots. Just couldn’t find the homerun holes.

Last Saturday of Fourth of July Weekend was different. THP and I immediately went amidst the crowds off Chazz Point in 5-6 foot of water.

We smoked them. With just two of us, we could only legally fill 4 gallons. We had three in about 40 minutes. I worked one sandy patch and just cleaned up. Then the tide started coming in and we took a break in the boat.

Had we stayed in the water, we probably would have limited out. Unfortunately, that incoming tide silted the water and the increased depth made finding the clams rather difficult.

And that has been that. My experiences have been pretty common, best I can tell. It’s not a complete skunk year. If you poke around and ask people, you’ll probably get pointed in a positive direction.

If you ask me, head off Chazz on an outgoing tide. If anyone else has any suggestions, feel free to leave them. 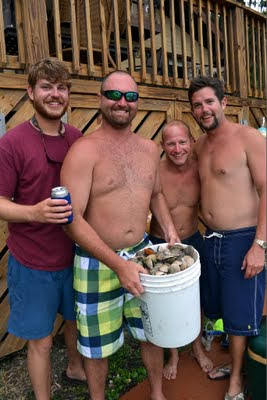