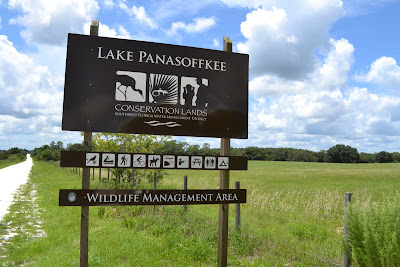 I stood at the gate staring down into the swamp. I wouldn’t be able to drive my truck any further. The road into the dark was steep – a rough ride back up on bike. Bikes didn’t matter, though. I didn’t have one with me. Middle of July, I wasn’t about to walk into that skeeter pit.

This is going to be a tough hunt, I thought.

I pulled a Lake Panasoffkee Special Opportunity Archery permit for 12/1-12/4. With twins on the way in September, my chances of driving far and wide for deer appeared awfully grim, so I made a desperate tag grab for anything close to home. Luckily, it all panned out, and I may salvage part of this season.

Much of this is done in conjunction with other agencies, in this case the Southwest Florida Water Management District commonly known as “SwiftMud.” You pay for the privilege to hunt here. Pay to apply, pay if you are successfully drawn and want the hunt. It is difficult to draw a tag. This is the first time I have been successful. You can apply for as many hunts as you want to help up your odds. I applied for three. Drew Lake P; am currently on the waiting list for two Green Swamp West deer hunts. One hunt I’m 353rd in line. The other, 435th. So I’m feeling pretty lucky about what I did get, especially since this hunt has a limit of 20 hunters.

But, wow, now the work starts. Lake Panasoffkee WMA is nearly 9000 acres of floodplain forest. From Google Earth you can see the land is mostly swamp and wetlands with scrub and flatwood habitat on the northern end of the property. With a large equestrian camp on the premises and being part of the Great Florida Bird Trail, I am assuming the roads and paths – 26 miles total - will be easy to travel. 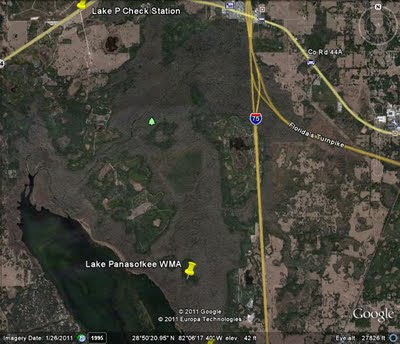 The greatest trouble with hunting swamp like this is figuring where to set up. For starters, there’s no telling how much water will be standing come December. I betting not as much as there is now – and that makes scouting difficult, as well. All it takes, though, is a hurricane or tropical storm to fill up those bottoms through most of the season. Next, swamps – at least those from my experience – lack many of the funnels and edge territory that one would normally queue on when setting up a stand. Scouting from the sky doesn’t help a whole lot. Also, I’ve not found much in my research about the property.

And to top it off, it’s an archery hunt with a four-point on an antler rule. Really limiting my odds, people.

Ideally, in a swamp like this, I’d find a promising locale, hang a lock-on, and pour corn 'til it shined through the canopy. Of course, I’d probably end up with a whole lot of hogs and not many deer. And it's illegal on public land anyhow.

Hunting in the swamp is much different than hunting broken and mixed terrain. I could sit and percolate on this hunt for a while and makes desperate guesses and assumptions of how it’ll play out, but it’s just going to take shoe leather. Look for some oaks, old rub lines and trails. It's standard issue scouting, just much more difficult to know where to start.

Just got back from a scouting trip. Noticed a signifcant amount of "remodeling" that DOF has done after only about a half mile ride from the gate. Looks like they are thinning out what used to be a large scrub oak thicket in that area on both sides of the road. Made it past the creek before the midday sun turned me back. Have a couple of spots picked out that will hopefully be good after the first hunt. Would love to get down further into the property to check it out. Will be interesting to see what all the earth moving does to the deer in the area.

It must not be that wet if they are doing all of that. I was gonna scout this last weekend but figured it'd be flooded

I'm curious about how your hunt went. I drew an archery permit for Panasoffkee for the second weekend of October 2012, I still have a few weeks to decide if I'm taking it or not. I haven't actually set foot on the place yet.

I drew the same tag. My hunt went well last year but did not tag anything. Missed the rut by several weeks. They said it was a low harvest because of the heat and # of acorns. Email me @inance880@aol.com