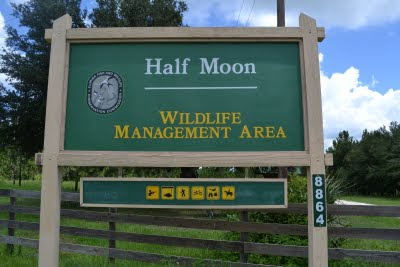 Whoever checks the sign-in sheets at Half Moon WMA and Lake Panasoffkee WMA probably wondered what kind of lunatic this Nance fellow is who claimed to be scouting at noon in the middle of July. I pulled deer quota tags for both of these lands, and I’d never set a toe on either. This was going to be a project.

Scouting Florida’s WMA’s is challenging, especially those open only to quota hunts. State hunters are lucky to have access to so much land, but if all you have are the rules and regulations yet no real kind of plan, you could be in for a trying time. Most quota hunts last only a handful of days, and the best lands are difficult to pull. So, consistently drawing a hunt from one year to the next is tough and doesn’t exactly help with any sort of institutional knowledge.

And I use the term “access” very loosely. To prevent damage to environmentally sensitive lands, the FWC keeps vehicle traffic on most public lands to a minimum during the offseason. While I’d much rather scout from the comfort of the A/C, that wasn’t going to happen. These places allow scouting days – but they are a day prior to the hunt. I need more time than that.

So, a plan. I drew the tags; that was the hard part. I drew general gun quota for Half Moon in November and a Special Opportunity Archery Hunt for Lake P in December (talk about more in the next post). I had a general sense of where the properties were, but was absolutely delighted to discover their entrances just a few miles apart. While scouting, I can kill two birds with one stone.

The next step was to explore Google Earth and other aerial sources. Immediately, one can tell there’s a major difference in terrain between the two. The solid dark green of Lake P meant swamp. The patchy landscape of Half Moon revealed more edge territory – and I suspected at first glance, more deer.

So I was in Homosassa this last weekend and decided to take a little detour on the way home and put my eyes on these places, get a feel for how far they were from the house, and get a better feel for the place itself. I probably should have taken a bike with me, but I needed to be back in Lakeland for a party.

I loved Half Moon on sight. I’d long heard it to be a popular WMA with a successful deer program. From what I understand, this property is one reason the FWC switched to non-transferable permits. People in the area would have family and friends apply for tags each year then transfer them to hunters. The FWC got suspicious when the same folks kept showing up year after year to hunt what would otherwise be a difficult draw.

I’d never been too keen on general gun hunts, mostly because I don’t want a bullet hole in me. Still, word had gotten around that this was a fantastic place to hunt. I felt remiss that I had yet to see or hunt the property. So when the time came to apply for tags, I decided to go the rifle route. One, because the hunt I applied for was right in the middle of the rut. Two, I already knew where I wanted to hunt for primitive seasons. If I didn’t score on Half Moon, so be it. Turns out it was my lucky year.

The property is 9,480 acres of the most ecologically varied landscape I’ve set foot on. There are 20 different natural communities on this property, from marshes and swamps to scrub, flatwoods, and beautiful mesic hammocks, hosting quite the diversity of wild life. The Withlacoochee River runs its western border and improved pastures of bahia grass hearken back to the old days of cattle ranching. 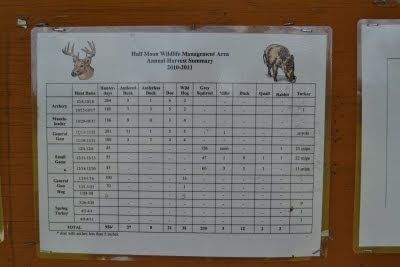 Now, I didn’t walk too far in, but my initial impression about there being a lot of deer seemed correct. I found a pile of tracks near the equestrian trails by the entrance. The place just felt whitetail-ish. And the good folks from the FWC had the harvest report on the kiosk. Over 5 weekend hunts last year – 2 general gun, 2 archery, 1 muzzleloader - hunters took 66 deer, 37 of which were antlered bucks that had to have at least 3 points on one antler. Not shabby.

Then Dad ran across the Recreation Master Plan for Half Moon that excited me even more. They have estimated the deer density to be around 60 animals per square mile. That’s a high number. In addition, the plan claims that “Hunting is consistent across the property with no ‘hot spots.’”

I’ve almost made it sound too easy. I’d be a real nincompoop if I couldn’t kill a buck here, huh! I’ll probably opt for the ground blind option in the white oaks – it is important to have a couple back up plans, too, if fellow hunters get too friendly. 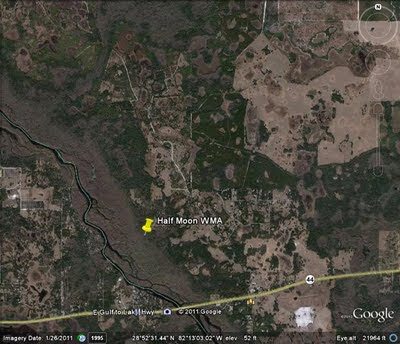 The edge territory from the varying ecosystems is probably the reason for the high deer population. With the variety of browse, it’s easy to grow and hold more deer than a location with a widespread, consistent ecosystem. It’s always a handy thing to keep in mind when you are looking for a new lease or place to hunt. If the land appears broken and patchy, odds are there are plenty of deer. Add a major river to the mix and you have a right fine piece of deer land.

So, Half Moon, rifle season, November 11-13. I’m jacked. Much more so than I thought I’d be. But there is still a ton of work to be done. I’m going back in a couple of weeks with the bike but even then it’ll be a haul. Heck, the check station is a mile deep into the property. Gonna have to put the pedal to the metal. An opportunity like this deserves a little extra sweat, though.

Going to be a good trip for you my man!!