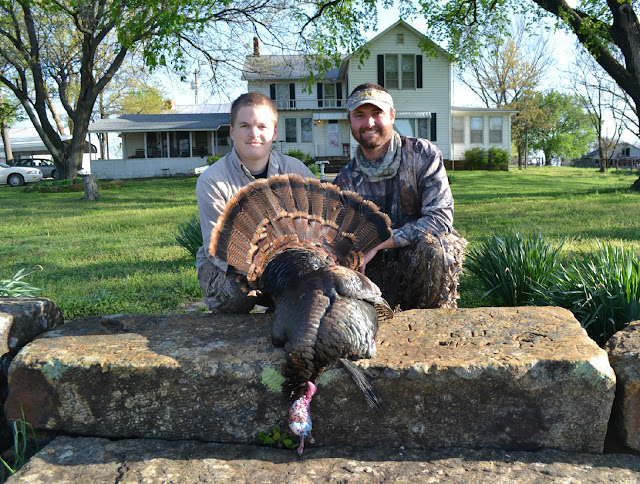 Nick and I were slipping through a vein of cottonwoods along a creek bottom that dissected two large crop fields, advancing on a distant roosted gobbler that had betrayed his presence to Nick's owl hoots. The morning having cleared from a full day before of rain that had softened our footsteps, we came to a bit of a stopping point. Nick hit the locator again and another gobbler fired up right on the edge of the field in front of us.

Then I saw a bird fly into the open.

We immediately found shelter against cottonwood trunks, not having time to wrestle decoys from our vests. Nick yelped a few times, and the tom's response was immediate and resolute - he was coming in. At 6:19 a.m., with the gobbler pacing in front of me at 20 yards, that morning's hunt had been the easiest part of this adventure - even that was almost screwed up.

Located in Independence, Kansas in the southeast part of the state near Coffeyville, Nick had been living at his family's farm while finishing school nearby. It took him visiting Florida in mid-March and a cocktail-infused evening around my firepit to dream up this hunt. The farm had been in Nick's family for generations, and despite numerous invitations over the years, I'd just not been able to coincide time with funds. We poured over the logistics of a late-April hunt, and after staring at my pennies and securing permission from my patient, turkey-widow of a wife, Harris and I booked tickets with Allegiant out of St. Pete on the 26th to join Nick for a weekend turkey getaway.

Now, everyone who knows me knows I'm terrified of flying, but some trips can't be passed up. As it turned out, the majority of my angst occurred while still on the ground. Despite living in Florida my whole life, I failed to recognize St. Pete had an airport. I'd always flown out of Tampa or Orlando. For whatever reason, Google Maps directed us to a tiny airport in downtown St. Pete. Realizing something was wrong, I ran into a terminal with roughly the square-footage of an average Cracker Barrel and hurriedly questioned the lady behind the counter where I could find the correct airport. Seemingly having been asked this on numerous occasions, she gave me the proper directions. Thank God, too. I wasn't getting on any of those Tic-Tac container-sized “airplanes” littered across that tarmac. So we were uncomfortably behind schedule as we strolled into St. Pete International.

With the worry of missing our flight and spending our hard-won free time at the Hard Rock Casino in Tampa, it was disheartening to see crowds of travelers stuffed within aisles waiting to check-in. I'm not sure what kind of crafts or flannel shirt convention was happening in the Springfield, Missouri area where we would hopefully land in a few hours, but there were deep, winding lines of folks, and with the boarding call closing in fast, our odds of seeing Kansas diminished further. Luckily, Harris had purchased priority boarding but had forgotten about it. Upon realizing this bold strike of fortune after ten minutes in line, he was able to call me up to bypass the masses and drop bags with just enough minutes left to clear security and sit at the bar for a pre-flight nerve tonic which turned out being extremely helpful for my anxiety.

After boarding and feeling pretty good about having made it in time, we were getting settled in our seats when a guy trying to stuff his over-sized carry-on into the overhead compartment blew a fluorescent bulb and sprayed glass on and around all of us good people sitting near the emergency exits. I think I handled it well. I don't remember screaming, but I don't suppose many do when their lives flash before their eyes.

Let me clue you, the pop of a bulb, the tinkling of glass, and the faint smell of ozone attracts some attention within an airplane. It took 6 airport employees to handle this situation: 1 to see there was a problem; 1 to diagnose the problem; 1 to discern how to fix the problem; 2 to clean up the problem; and 1 to report the problem and tell the guy he owed forty bucks to check his bag. I leaned over and told Harris that if anything else happened, he'd be going solo.

But, we landed in Springfield without further issue beyond the delayed arrival and me being on the far side of comfortably numb. The weatherman was the one who threw a wrench in the issue now. The forecast had called for warm and sunny for the entirety of the trip. We landed in a cold drizzle that lasted through the first day of hunting. We tried a couple of set-ups Saturday morning but with no gobbles, the cows laying down and vultures roosted, it was evident that the only thing we'd be getting on this day was pneumonia. It was decided we should pull up stakes, grab a hot lunch and watch lucky hunters chase gobblers in Kansas via DVD.

As the rains eased later in the afternoon, we took a drive around the property. In this part of Kansas, the turkeys are a Rio Grande/Eastern hybrid. Some gobs have more of one subspecies characteristics than others, but we were in the state's designated intergrade zone which made for a unique trophy. Fascinating, too, was Nick's description of hunting this area. He maintained that gobblers were often a here-today, gone-tomorrow prospect. And while he received a weekend's ration of commentary and jokes about migrating turkeys, it did make some sense.

See, the property we were able to hunt totaled 400-500 acres. In parts of Florida I'm used to hunting, 400-500 acres is dominated by swamps with little clearings and fields toms are attracted to. Navigation through such areas is tricky even for game animals. There are a lot of obstacles that dictate habits. Even on wide-open properties where occasional cypress heads, pine stands, or oak hammocks comprise the only vertical landscapes, Osceolas typically return to the same roosting areas. Also, one has to consider the fragmentation of land in Florida by development and roads and whatnot; turkey populations are, generally speaking, squeezed together - Kansas, not so much. They are free and clear to travel, impeded by very little from what I saw. The turkeys on this and adjacent properties will apparently follow deep creek bottoms for miles picking new places to fly-up each evening. It's why locating and roosting birds in the evenings is an important strategy here, not something I worry about too much in the Sunshine State.

And while I don't want to place too much emphasis on the habits of an individual bird and how that translates into a whole subspecies, this gobbler did everything I would not expect from an Osceola. One was the fly-down time: 6:15 in the morning. I can't recall a Florida tom ever arriving that early – heck, most of the birds I worked this season didn't touch the ground until well after 7. Two, there was a hen calling from the edge of the same field, and he left her and that opening to come to us, crossing a deep ditch - almost a ravine – along the way. I still can't reconcile that. Perhaps that other bird we heard was the dominate animal, and homeboy knew it. We'll never know, but I credited Nick's calling because I'd like to be invited back one day. Three, the gobbler stayed in range while I buffooned with the shotgun. 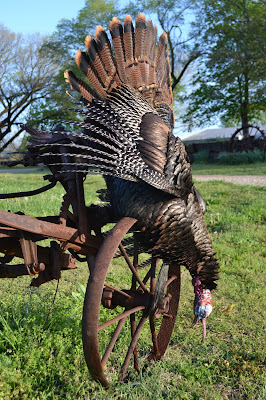 For starters, everything happened so quickly that I failed to put a round in the chamber. Doing so with an incoming gobbler is a real trick of the pros - said no one ever. Fortunately Nick had, and I escaped without the clatter of fully racking the pump. Then, I'm sure you've heard the mantra, “Don't go into battle with an unproven weapon?” Well, many folks over the years have dusted gobblers with the Mossberg pump Nick loaned me, but I was unfamiliar with the use of the red-dot scope mounted on it. Since we didn't place decoys, the gobbler was pacing along the ditch searching. He wouldn't stay still, and I could not pick him up in dawn's low light with the short field-of-view incumbent with those scopes. He alarm-putted once, and I knew I'd have to get my stink together or catch Hell in camp for the remainder of the weekend. He walked behind a tree, and as he did, I focused the red dot on the trunk. When he stepped out the other side, I moved the reticle slightly to the left and under his chin and crumpled him at 35 yards to save the day. He wasn't hanging out any longer.

Weighing in at 22 pounds with a 9 1/2-inch beard, Nick and I performed the ritual high-fives and recount of the events that occurred  We laughed that the walk in and back took four times as long as the hunt. With the rains history and the temperature warming during a bluebird day, we calculated the gobblers were going to go gangbusters and more gobblers would meet this one's fate, but it wasn't to be. Harris, unfortunately, didn't hear much. A mid-morning hunt wasn't any more productive, and Nick was unable to roost any birds that evening. With great friends, you'd like to see everyone have a chance to pull the trigger.

But that's just turkey hunting - everyone present knew that. We were lucky to have the one in hand. And despite the travel and weather woes, with the company kept and the beauty of Southeast Kansas, it's a trip worth doing a 1000 times over.

Glad Harris & you could visit the farm and hunt with Spig. It is a special place.

It certainly is. Thankful for the chance to get out there!!!