Teach a man to fish and you feed him for life. Give a man a bowfishing set and puddle him into Amanda Bynes, I swear to God.

Case in point, I missed the same damn gar four or five times Sunday morning. Once, I was even able to glance the arrow off the edge of the concrete dock, shattering my confidence but, luckily, not my arrow. Each ploink in the water, the gar lazily flitted further under the dock, taunting me. It was just about enough for me to bleach my hair, pierce my face, and indulge in heavy narcotics.

In all reality, I should have taken my hostilities out on the few dozen stingrays in the shallows and stacked them up like silver dollar pancakes, but it just didn't seem sporting enough, especially when I was supposed to be helping clean up the river house to rent this summer. If a kill was to be made, it needed to be impressive enough to absorb the verbal beating that would surely ensue for taking a Union Break. The gar just narrowly fit in that category.

Which brings us to the sheepshead, the Ol' Convict Fish. The sheepshead is one of those fish, if you're a real sportsman, you typically don't target between the ages of 13 and When You Have Kids. Don't get me wrong – they are fun sport on rod and reel and delicious, to boot, but it is the equivalent of rabbit hunting. Grander plans hop in the way of a good time, at times.

I've caught, I don't know, hundreds in my youth and hadn't given them much thought since then until I got my PSE Kingfisher a couple Christmases ago and started marching down the list of legal fish I could conquer with a bow. Actually, “conquer” may be too strong of a term given my aptitude with a bow, or lack thereof. In the last 2 ½ years, I've shot at dozens. I can accurately describe to you with mouth noises what my arrow sounds like when it misses a sheepshead.

What makes them such attractive quarry – aside from their excellent table-fare and prison-uni stripes – is their ability to hang around just long enough to make you think you have a chance. They have a tendency to hang in the shallows and feed along seawalls and pilings, stripping them free of barnacles with their creepy baby teeth. They are slab-sided and appear dim-witted, but once you make eye contact and start to anchor your bow, they are gone in a flash leaving you with desperate, flailing shots at where the fish was a split-second earlier, sort of how I've always felt about trying to hit a baseball. It's frustrating.

So I was caught in this cat-and-mouse game with a fairly large sheepster on Sunday. In between gar misses, I'd catch him under the boat house, or at the end of the dock. In all reality, it could have been different fish, but as a trophy hunter, I believed I was after The One, heroically engaged in a Battle Royale of wits with what amounts to an over-sized panfish. Each time I thought I'd have a shot, he'd spook, either from my shadow or movement or wife yelling at me to help her move some piece of heavy furniture. 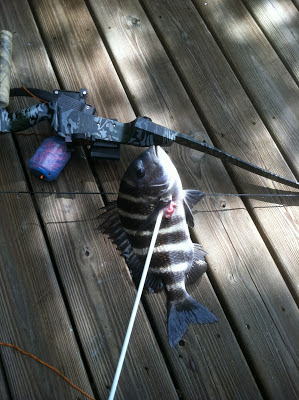 Time was running out. As I was making my last stalk along the water's edge, I notice the blue-gray tail of homeboy sticking out from under the dock, high in the surface column as he grazed on the piling. I pulled back the bow and gangster-leaned to the side and plugged him without him knowing I was even there. I reeled him out of the water and hauled him to my wife for her to admire, pleading, of course, for her to put down the box of family heirlooms and grab my camera.