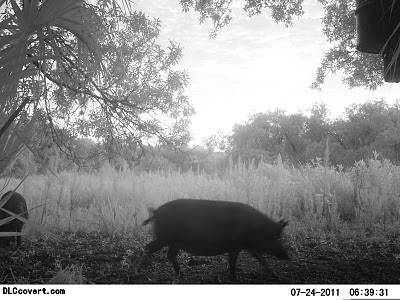 A lot of wild hogs are going to die in Florida this fall and winter. The signs are everywhere for a fine season. I’m seeing rooting everywhere – even along public roads and highways. It’s a weak acorn crop in many parts of the state, and the hogs compensate for this cash crop deficiency by increasing this destructive, hatred-breeding feeding style. Hunters are reporting plenty of swine activity. I’ve not set foot on hunting land in Florida the last three months and not seen a hog - total opposite from last year where you’d slide across acorns like marbles on a tile floor. The hogs fed at their leisure, limiting their daylight movement.

As we move out of the deer rut in most parts of the state, hogs will become the primary target of opportunity. Let ‘em have it!

Well, let’s pretend you snuffed out a hog. What to do now is critical to fine eating pork, a memorable mount, and even your health.

Things to consider as you slice your swine.

1. Taxidermy Tips – Starting on a high note, let’s say you have bagged that monster boar for the den, garage, camp, or wherever this animal head will fit with your spouse’s décor. Avoid dragging the hog with his head hitting the ground. This could burn off his hair and even potentially wreck those chompers on a pine stump or some other debris. Most large boars will have a thick shield over his shoulders. It behooves the hunter to cut well behind this and peel everything down from there. The taxidermist can then deal with the extra hide. Ice it down immediately and keep it on ice, making sure it’s not sitting in a puddle of melted water. Freeze or take to the taxidermist ASAP. A buddy of mine shot his first boar a few years back in pretty warm weather. The taxidermist’s best guess was the hog was either sick or improper care led to a mount that stunk so bad, the boy had to keep it in a shed outside after getting it home. We tried knocking it out with Febreeze, Lysol, and even scent-killing foot pads. The flies enjoyed it. By the way, you’re likely to pay more for a boar mount than a deer; it’s just that much more work for the taxidermist.

2. Hose that Bad Boy Down – If you have a water hose available, wash the animal thoroughly. Get off all of that caked mud, dust, dead ticks, or whatever. One, this helps prevent against contaminating the meat once you commence to dress it. And two, hog hide will dull a knife quickly; the extra dirt and grime will accelerate this process. Put that piggy through the wash.

3. Wear Gloves – I’ve never heard of a hunter getting sick from cleaning a hog. I’d have to believe contracting a disease from a tick from their hide or even from a mosquito hanging under the lights of the cleaning shack would be more likely. However, wild hogs are known carriers of human-transmittable diseases such as swine brucellosis. Simple, cheap latex gloves from the grocery or drug stores are invaluable in your day pack.

Here are the recommendations on hog handling from the FWC: 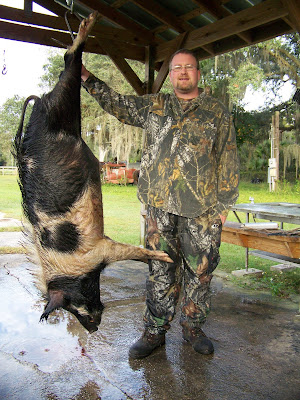 Wild hogs, though not originally native to Florida, are now found within all 67 counties, and like any wild animal, can carry parasites and diseases - some of which can be transmitted to people. One such disease for hunters to be concerned with is swine brucellosis.

The FWC is advising hunters handling wild hog carcasses to take the following precautions to protect themselves from exposure to this bacterial disease:

- Use latex or rubber gloves when handling the carcass or raw meat.

-Clean and disinfect knives, cleaning area, clothing and any other exposed surfaces when finished.

When cooking wild hog, as with any wild game, care in handling is an important part of disease prevention, and the meat should be cooked thoroughly to 170 degrees. Swine brucellosis is not transmitted through properly cooked meat.

Brucellosis in people is called undulant fever and could be transmitted if a hunter cuts him/herself while field-dressing a wild hog or was exposed to the animal's blood or bodily fluids. Symptoms include a recurrent fever, chills, night sweats, weakness, headaches, back pain, swollen joints, loss of appetite and weight loss.

Hunters who exhibit these symptoms or may have been exposed should contact a physician.

4. Meat Care – Ice down well after cleaning the hog. Now, here’s where people separate. Some folks prefer to brine wild hogs – boars, especially – to remove a lot of the gamey taste out and tenderize the meat. It’s a long process of salt, water, large coolers, and time. Some hogs are just going to be poor without brining. But I am ignorant of this procedure. I don’t have the time, space, or the need to keep large hams frozen for any length of time.

5. In the Kitchen - Generally speaking, I’ll put the whole hog in a coffin cooler and take it to a processor. The hams I’ll have cut into cube steaks or roasts. The shoulders are rolled into roasts. I prefer the roasts because I can put it right in a crockpot and slow-cook it. I’ve not had this fail me yet. The backstraps can be kept whole and marinated and is quite delicious when cooked over low-heat. Or, sliced into boneless chops and grilled quickly. Or, I’ll have bone-in pork chops cut. The chops and cubed steaks I like to fry and simmer in gravy to tenderize. Ribs are good if meaty enough; if not, it gets ground into breakfast sausage or links. A lot of people do this with boars in lieu of brining. Fat should be trimmed – it’s not nearly as delicious as on domestic swine. For grilling, wild hog begs for marinades; Stubbs Pork Marinade my favorite, followed by Italian dressing. (Feel free to go through my recipe archive for ideas.)

There ya have it. From loving life to your fork and knife. My Porky-Senses are tingling – it’s gonna be a banner year for the wild hog hunter. Best of luck on the hunt and keep these things in mind to keep enjoying your kill after the hunt is completed.
Posted by Ian Nance at 12/09/2011 12:18:00 PM

Thanks for posting, Ian... There are many new hunters to FL... and certainly A LOT more hogs than years past... word needs to be out that there's plenty o' pork in them woods !!! Your words of caution & culinary suggestions are, as always, valuable !