2007. The year started with Bulgaria and Romania officially joining the European Union and signed off with the conclusion of the Massive Big Dig construction project in Boston. Between those two marks, not much else exciting happened either - except for one event that changed the world of treestand hunting forever.

On January 9th, Steve Jobs introduced the iPhone, ushering in the Age of the Smart Phone. No longer did hunters have to concern themselves with just poor cellular reception. We were then confronted with the possibility of weak Internet signals, fragile phones that aren’t exactly built for outdoor use, and batteries that die within a couple hours of going off the charger. It became a brave new world.

See, despite consuming copious and irresponsible quantities of Kentucky Water since that time, I do recall what Treestand Living was like before we could wield this powerful new technology. All we had for entertainment during the Dark Ages was to sit in our perches and appreciate and revel in the beauty and glory of Nature. Thank God that’s over.

Case in point. This last weekend I bowhunted Lake Panasofkee WMA on a Special Opportunity Hunt. I saw a spike, a doe, and a young boar hog, but these encounters were fleeting, leaving plenty of down time. The wind was blowing 30, the rut was all but over, the bucks weren’t moving. But I was still able to accomplish a lot including harvesting crops in my virtual rural community, photograph my surroundings, keep tabs on my wife and kids – or vice versa – and stare at my pitiful bank account in a vainglory attempt to figure how I’ll pay for Christmas gifts and an upcoming duck trip to Okeechobee. Even killed a few rampaging dinosaurs in the interim.

No, these phones are great tools, and I’m very pleased with my iPhone. It’s so much more than could have been imagined before 2007. I’m not sure how they don’t cost thousands of dollars. Luckily, you can make up this difference by purchasing apps – which I hope is a term everyone is familiar with by now.

Many hunter-helpful apps come installed on the factory phone. Weather apps give you up-to-date radar and forecasts. The maps app on my iPhone provides a Google-powered aerial photo of where you are or want to be; a fantastic scouting tool. I’ve taken my first videos of deer with the phone and uploaded them to YouTube, all while swatting mosquitoes and listening to armadillos rustle in the palmettos.

Then there’s the social media. I’m now able to tweet every excruciating minute detail of a hunt, from swatting mosquitoes to the activities of said armadillo. With Facebook, I can update my status and wait for responses from family, friends, and acquaintances. (Example response – “You’re disgusting! Hunting again while your wife is home with infant twins?”) And, of course, stay updated on football scores and baseball trade rumors.

But there are other special apps you can download through the App Store. Some are free; others come at a nominal fee. These are the ones I want to cover today; ones that help slay the slack in stand-time while waiting for Bruiser Buck to bumble by. Not that this has happened yet. Perhaps I’ve been too busy fooling around to notice him. 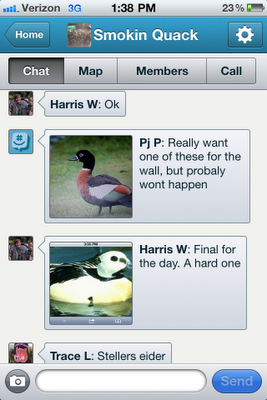 So without further delay, here are a few of my favorites.

1. GroupMe – If all you do these days is text your hunting buddies, you are mired in the mid-2000’s. GroupMe is an app that allows groups of friends to text and banter in an open forum. It’s neat to compare notes on what’s being seen when a few people are on the same trip, or get reports from those in other places. And it’s positively devastating to get these messages when they are hunting and you are not. You can text pictures of your latest kill, or kill time with mindless banter, insults, and jokes. 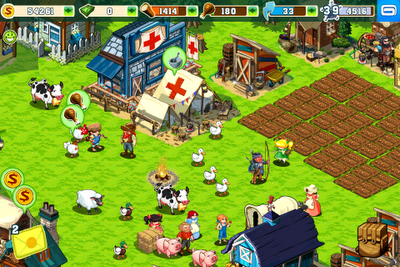 2. Oregon Settler – This game is based on the old Oregon Trail game we played on PC’s in grade school. In this version, your pilgrim is dropped in the middle of God’s Country with the objective to raise a town, improving its economy, and care for the livelihood of its citizens. Wild animals gallop through town that you can blast for more food. It’s realistic in that it takes me typically 3-4 shots to kill a deer; unrealistic that after every shot, a food icon falls off, like you are blowing hams off the animal to collect. Really, it’s the ultimate game of socialism. Your character runs around harvesting crops, raking in monies, and solving each level’s new challenges. All the while, a herd of shiftless citizens plague you to solve their medical and social ills without even an offer to help around town. (HINT – move all your sick people to the far end of town and let them croak. It won’t affect anything other than your conscience.) 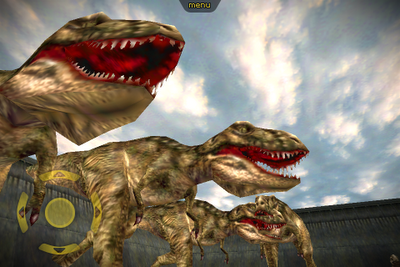 3. Carnivores: Dinosaur Hunter – Pretty self-explanatory. You are dropped off on a distant planet with a handgun to hunt herbivorous dinos. After accruing enough points, the game allows you to upgrade your arsenal with rifles, shotguns and, inexplicably, a crossbow. After honing your skills on plant-eaters, you can trek down the carnivores. You'll probably be eaten a few times before getting the hang of it. The ultimate goal is a trophy stegosaurus – no, wait, it’s the tyrannosaur. He can only be killed with a careful shot to the eye. If you miss, he tramples everything underfoot to catch and toss you around like an orca pitches a baby seal around its pod. There are dinosaur calls, you have to play the wind; it’s a solid hunting game. Your biggest kills are displayed in a virtual trophy room that can be shared with your family, friends, and acquaintances on Facebook – weirdo.

Last I read – or have totally made up – there are hundreds of millions of apps for your pleasure. The hunting world is well-represented. As I’ve said, they are great ways to kill time in the stand. These above are all free, but many others will be happy to take your money.

I have a blackberry and use it mostly for writing. (Wrote two 1200 word articles on it this season while sitting in the stand) The writing isn't easy but when you have nothing but time! LOL!

I also like to check weather and anticipated upcoming wind directions.

Downloaded a "camera" app that turns the camera flash on permanently until you turn it off. Saved me a few times this season when I forgot my headlamp!

I have that flashligh app, too. It does come in awfully handy. Also a police scanner...it's only come in handy once or twice.

I have an Iphone too and became a lifesaver in stand. My latest addiction is Instagram and I just started playing Oregan Settler. Never heard of the Carnivores. I'll have to check it out. I just finished playing Zombie Farm which is much like the Oregan Settler. For mini, quick time wasters...try Office jerk or Office Zombie.

Saw this the other day and though of this post.