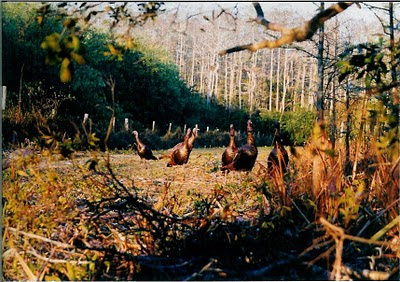 True story. All of it. I promise.

The flock of hens milled under a large water oak, the Boss Hen circling the edge of the group. They were close. The Boss kinda-sorta thought she saw me sitting there camo-clad and still. She just couldn’t be sure. Slowly, she’d bob her head back and forth - as turkey do - inch a step or two closer, peering through those beady peepers trying to catch me blink or shudder.

Not happening. I know my game. Never look ‘em in the eyes. It doesn’t matter if the whites of your eyes are tattooed camo, they will catch your pupils fixating on them. I sat motionless and observed the hen with peripherals.

I’ve long told people that if anyone catches a turkey by hand they blow by hero status and advance to legend. Over the years, a few turk-a-lurks have come close but stayed just out of reach of my ninja-like reflexes. Had more than one curious hen stroll by my boot laces. Once had a flock of jakes try to huddle under a myrtle bush with me. The tease of having that story recounted for generations around the campfire and the admiration of fellow hunters has eluded me.

Now, Florida does have a long fall turkey season. Starting in September, one can hunt them with bows. Then blackpowder gear. Once rifle season starts on private property they are fair game, but only toms. No mention about using hands as lethal weapons, but none the less, hens are a no-no in these parts.

One must consider how far he or she will go to achieve legend status. The tales of Robin Hood haven’t survived the centuries because he championed welfare and social programs for the poor and persecuted. He broke the laws and defied authority. The odds of The Man catching me with a hen were miniscule. She could have easily been tucked away, no one more the wiser, except, of course, those I would later court with this story.

Boss Hen continued to sloth closer to my haunt. I’m right-handed, so I needed her approach to be to that side. She was trending left, however. The first gobbler I killed I blasted from my left shoulder. About broke my nose from the creeping on the stock, but it worked. It’s not that I am crippled on the port side; I can get better momentum from the starboard. If you didn’t know already, turkey are quick moving critters.

She got to the end of my rubber boots and clucked a couple times. The other hens were alarmed. Boss Hen looked back and spoke something in Turkey. If they had voices, I would think it’d be a shrill cadence like that of Katharine Hepburn or Fran Drescher. Boss Hen seemed to be telling her people, “Quiet, wenches! I know what I am doing.”

The final last words of a fool.

She was just off my hip now. It would have to be a left-handed stab. In a spot like this, you just want to have Eminem’s Lose Yourself as the theme music.

You only get one shot, do not miss your chance to blow. This opportunity comes once in a lifetime.

Or Odysseus in the opening of Troy.

Men are haunted by the vastness of eternity. And so we ask ourselves: will our actions echo across the centuries? Will strangers hear our names long after we are gone, and wonder who we were, how bravely we fought, how fiercely we loved?

I snatched out with a left jab and...

...smacked my wife right across the chest. She shot up out of her pillows, half stunned, half crying, wailing about why I’d hit her when she was sleeping. The frenzy of actually catching a live turkey by hand would have been less chaotic.

I frantically apologized and sheepishly tried to relate the story. It would have to wait til the morning - it didn’t go over any better then. I finally returned to Dream Land, but the flock was long gone.

Carolyn has never particularly enjoyed me watching turkey hunting on TV while in bed.

Ian, that was great! Loved how you built up to it. I am cracking up over here. Nicely done! For the record, I am not allowed to watch hunting shows right before bed... long story.

Well I hope you do tell one day!!

Ian,
Congrats to you ~ Your blog has been chosen as one of the featured outdoor Blogs of the week over on the Outdoor Blogger Network. The announcement post is up and your RSS feed is live on the site for the week.
Well done on your blog and keep telling us these stories ~
Rebecca and Joe

Ian,
This posting is too funny. DU ritualistically beats me in his sleep. My subconscious mind has actually started to ward off the blows and I generally wake up blocking one of his shots. I never thought to ask him if he was trying to grab ducks out of the sky...

I'm not prone to laughing out loud at my desk but I had to give in. Great post Ian. You'll be hard pressed to top that one.

Thanks for the laughs,