Duck Hunting on the Straight and Narrow 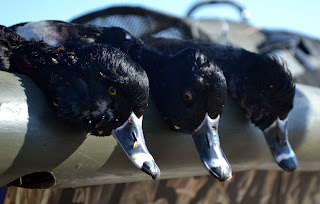 With duck hunting it is not too difficult to spill the banks of the written laws. Now, if you’re unlicensed and make a hobby out of shooting lead from unplugged shotguns on someone else’s property while piling up birds to the point it threatens a flyway, you’re nothing more than a wanton criminal bent by your own sadistic whims and concepts of sporthunting. There’s really no place for you here. But there are plenty of other occasions when well-intentioned, law-abiding hunters cross the line into the realm of lawbreaker.

Let’s be clear before we move forward – there’s no gray area. The USFWS and other governing bodies have laid bare the laws. How they enforce them is often a matter of discretion, but ignorance is not an excuse, though we all know plenty of folks where you could at least make a strong case out of it. The rules that bind the sport are so varied that accidents do happen.

We can always start with motorized boats. It’s a cinch to have running lights fail or forget to slap a current registration sticker on the side. Flares can be out of date. Maybe a cushion or life vest blew out on the ride to the ramp. Or whatever is absent on that long list of safety gear and equipment boaters, at least, must carry on their vessels.

Last year’s Early Teal Season was a prime example. We’d run out of before dawn when the bow lights quit and the spotlight failed. The captain used a flashlight to navigate and alert others to our presence. With few boats around us and the moonlight illuminating the lake, it wasn’t a dangerous matter. The Man got us the second that flashlight was quelled for the slightest moment, descending on us like a hawk on a field mouse. It happened quickly. Granted, they had no running lights and their boat was solid black…but you can’t argue with The Man.

I’ve seen this sort of thing happen too many times, and, I mean, they are right, it’s the law. But, frustratingly, there is almost no circumstance in this world where a game officer will show mercy and not cite you for a vessel violation. Furthermore, if they want to find something wrong, they most certainly will. I’m convinced some would look past large bales of grass tucked under the bow and focus more on the mold content of your throw-cushion thus fining you for it being out of code, probably because it’s a simple ticket and they won’t have to appear in court.

Speaking of having to go to court, that reminds me of a very recent situation. Of course, I would not be party to such things, so let’s think of this as a secondhand story instead. There was this group of guys who hunted STA 5 one Sunday afternoon back in September for the Early Teal Season. These guys shot one duck shy of their limit and were quickly stowing their gear to return to the check-in station. This being , their bare flesh was being flayed by the various ground based and aerial combat insects that reside here. They did what anyone who still has nerve endings would do, namely, toss all their gear and ducks into the bed of a truck and haul butt out of there.

Upon arrival at the check station and staring at the mound of ducks behind the tailgate, the officer informed these folks that it was against the law to store ducks in that manner, even though the group was under their limit. All the birds must be separated and/or kept on a stringer of some fashion to designate who they belonged to.

She said this was a federal offense, and they should be lucky federal officers were not there or the group would be cited and have to return to to go to court. Kindly, this group of ne’er-do-wells was allowed a pass. She let these guys know – several times – how nice she was being, and there were plenty of thank-you’s to go around because no one wants to go to court in Hendry County where the judicial system is already bogged down with meth possession trials and cockfighting arraignments.

Naturally, I knew all of this because I read all the federal rules and clearly understand their meaning…OK, I’m lying. I’ve been duck hunting off and on for over ten years now and have neither heard anything about this nor seen it done despite the fact I hunt with experienced waterfowlers. Hell, I’ve left other STA’s with similar piles of ducks that were checked by game officers and nothing was ever said. Having looked it over a second time, it is there in the guidelines in typical legal jargon, easy enough to browse over without fully understanding its purpose while seeking the current bag limits.

Did you realize that until you get to your primary residence – or abode as the feds call it - that all dressed birds must have their head or one wing attached for positive ID? So make sure you keep a wing on that breast after you’re done plucking it in the hotel room sink. Furthermore, if you transfer a bird to another person, including a game processor, taxidermist, or buddy who has freezer space, it must have a tag attached with your name, signature, harvest date and address of the hunter who shot the bird. If you drop off several dressed birds to anyone, you must also include the species and total number of birds killed on that day. You can clip this info to the wing, I suppose.

Well, let’s finish this off with a positive note and not get into those hunts when a bag limit is exceeded or a bird misidentified. Do your best to read the rules and keep an eye out for changes. Quite honestly, though I do read the rulebooks, I’ve mostly learned this sport by following the crowd. But just like trying to argue your way out of a speeding ticket by saying you’re just going with the flow of the traffic, no game officer worth his salt is gonna buy that excuse.

When you do mess up, just hope you’re not caught; if you are pray for the kindness of that game officer and hope he or she is not a federal agent.

Imagine the looks you’ll get in the courthouse when you tell the resident hardened felons that you’re in for failing to keep your ducks in a row.
Posted by Ian Nance at 12/04/2012 01:19:00 PM

In our area, where hunting often requires 8, 10, or 12 dozen full body decoys, you are going to have more than one hunter. And if the birds fall, they are going to almost definitely end up in a pile.

The rule, as it's been read to me (sternly), and verified in a friend's state (VA) court case, is that the birds have to be separated and labeled at the time the hunt has concluded. Basically, when the ducks are transferred from the boat (or 4-wheeler) to the truck in which you are going to get on a public road. There is no such thing as a "blind limit" although, when 80 geese are tolling in on top of the blind, we'd be wise to consider the blind's entire limit (I shot two geese accidentally with one shot this year - had I shot one earlier, I would have been in violation).

On transporting someone else's birds - always have tags. Construction flagging, plant tags, ANYTHING to identify who shot each one, on what day, and in what county, along with their phone number.

The "transport with wing" rule is a tough one in warm states - how many whole geese can you fit in one cooler?