I won't insult you - today, at least - by offering up a venison taco recipe. My guess is, if you're capable of finding and reading this website on your own, following the rules on the box of Ortega should be no big deal.

But I have been wrong before.

Preferring the Taco Bell brand seasoning myself, I make venison tacos at least once a month. They're easy and delicious, and since it's just my wife and me eating them - for now - there's typically plenty of leftovers. If you run into similar situations and want to improve upon the Ol' Microwaved Taco Reheat, try making a batch of taquitos.

Generally speaking, we'll have 1/2 pound of leftover venison taco meat after dinner, so that's going to be our measuring point for this recipe which is enough for 12 -15 taquitos.

Preheat an oven to 350-degrees. Taquitos are often fried in vegetable or peanut oils on the stovetop, and that's probably how God intended it; however, sin aside, I don't always feel like cleaning up stovetops after pops and sizzles of the oil. The baked method is easier, healthier, and the difference in taste is negligible.

Add one can of enchilada sauce in with the 1/2 pound of cooked ground venison. You may think that the enchilada sauce may seem like Mexican Overkill after the deer has been cooked in taco seasoning, but trust me, it's not. Add to this a half cup of the shredded cheese and mix well.

Meanwhile, you'll need to cook the tortillas to make them pliable. Again, you could cook them 10-15 seconds a side in a skillet on the stove; to save time and energy, it's far more efficient to wrap them in a paper towel and nuke in the microwave for 2 minutes. 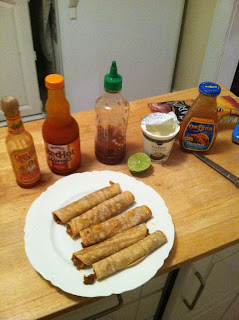 Once everything is prepared, lightly grease a cookie sheet. To stuff the tortilla, place the venison mixture on the edge of the tortilla and roll tightly to the other end. Placing the meat in the middle and trying to fold it is a waste of messy time. Place seam-down on the greased sheet and finish your batch. Before tossing them in the oven, I like to give them a quick blast of spray butter.

Bake for 30 minutes and remove, covering the rows of taquitos with the remainder of the shredded cheese if you feel the need. I usually do - though not in the picture to the left. They will be piping hot and should be left to sit for a few minutes, and it's now that you can whip up the accoutrements.

I'm a straight-up hot sauce and salsa guy. Carolyn likes sour cream. Chopped cilantro and lime juice are popular garnishes for taquitos. Guacamole, if you're down with that.

Not a fan of the Asian chili sauce, but, like you, I can throw back some Cholula. Any chance of a Venison Taquito Road Trip or Tour? I was wondering if you could recreate this spread in Minnesota for your Minnesota fans.

Anything for a fellow cholula-phine!

SWEET!!! I've been looking for something like this because we love, and I do mean L-O-V-E love, the venison tacos in this house.

Nice work keeping me "employed" in the kitchen!

I buy those things by the boxfull!Love em.