The Last Days of Whitetail Season 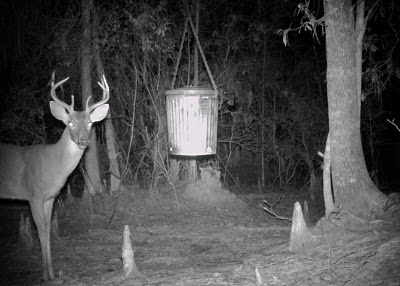 Travis and I cornered a 90-degree turn on the local hard road that halved our hunting property at the time. It was a cold, wet, blustery mid-January weekend, and the stand hunt that morning did not pay off. The rut had ended in November, and the rubs and scrapes were stale. So, as we headed back to the fire to dry off and warm up, I was astonished to see a spike lingering around a myrtle bush a few dozen yards off the road.

We parked his Chevy a hundred yards down the road and crept back onto our property and stalked up to the buck. He wasn’t alone. With him were another couple spikes and a young four. The eight-point that popped up after T had shot the four-point was the best buck I’d taken so late into the year – an unexpected treat. These bucks were far from any stands or anywhere we’d even considered placing a stand. They were basically camped out here in the far corner of the land, away from our intrusions – though, apparently, vehicles didn’t seem to bother them. Too bad for them I still have an eye for antler at 45MPH.

These are difficult days for deer hunters. The crops have been harvested, the hunting pressure has mounted, the rut is over (in most places), the underbrush and browse has largely dried up and fallen away, and the deer just don’t move as much or have gone nocturnal. Late-season deer hunting is a trying exercise. But - unless you are especially cruel on your deer herd - there is still game left and, staring at the calendar, the fall is a long ways off.

Late-season deer hunting is not without its merits. It’s always a fine time to round out your freezer with a doe, or a younger buck, if the spirit moves you. Possibly even a wall-hanger. The weather is tolerable for scouting. And it gives you the opportunity to try other hunting methods you wouldn’t normally attempt during the prime times.

So let’s take a look at a few ways you may be able to bag that last deer of the year, or at the very least, improve your knowledge of the property and woodsmanship.

1. Deer Drives and Still-Hunting – When the season starts and I’m hanging from a tree, I’m very timid about hunting pressure. I want fresh fish and not stink up the area or unnecessarily spook my quarry. When there’s nothing left to lose, why not switch up tactics? In places where it’s possible – namely smaller blocks of pines or hardwoods or dry swamps – it’s common practice to organize a deer drive.

It’s not like you need to hand out pots and pans and raise a holy racket to drive deer. Stage two or three pushers – in blaze orange, is a good idea - upwind of the area you are driving and sit a couple blockers downwind. Space everyone out and slowly slip the pushers through the woods. Often time the pusher will get a shot – and the blockers benefit by the jostled game.

Likewise, if you’re hunting alone, still-hunting from the downwind side can often produce. The gist is to get otherwise bedded and holed-up deer on their hooves and moving towards a barrel. By the time next season comes around, your stink will be long gone. Unless you really smell, dirtball.

2. Scouting – While you’re walking around doing either of the above activities, it’s likely you’ll notice things about the property you’ve missed before. As I said, the underbrush is gone and game trails become more obvious. You can locate hidden rublines or a lone oak or persimmon or honey locust in the middle of everything that’ll produce feed for hidden deer in autumn.

I can’t tell you the number of times – no matter what state I’m hunting - I’ve slapped my forehead and thought, “Damn, I should have been hunting in here back in October.” It’s highly unlikely you’ll find, or want to seek out, such places in the heat of the summer.

3. Hunt the Weather – Those gray days of winter get depressing, for sure. Still, the leading line of the foul weather that accompanies cold fronts will have deer and other game animals up foraging before the bottom falls out and they hunker down to wait out the storm.

I wouldn’t suggest sitting on the borders of an open field, but trails inside wooden edges of fields that head in and out of bedding areas are solid bets. And any place that serves up munchies such as wet areas that still support green grasses or cold-hardy vegetation. Or corn feeders.

4. Discover the Secondary Rut – This phenomenon is tough to get a bead on. In the South, the rut is often so stretched out that it’s hard to define when a secondary rut occurs. In northern states, I’m told, it’s a little easier as the rut is condensed to just a couple weeks during the fall. Then, the secondary rut comes in about a month later when unbred does go back into estrous. Many of the same strategies that are employed during the rut, but after a month of cracking rifles, the deer are a bit touchier and hunting areas discussed above is prudent.

5. Hunt Places with a Rut – Sections of Texas, Alabama, SW Georgia, NW Florida and stretches of Central Florida all have late ruts that run through January and into February, in some instances.

I try to be a Rut Groupie. In the past, I’ve traveled different states trying to hit the prime times. These are typically clustered around October and November, but I know it’s not worth a late December North Carolina hunt when the Georgia lease is still host to rutting bucks. When January rolls around, Central Florida still has a rut. (In fact, you could hunt the rut almost every month from August to February just traveling through Florida.)

Deer hunting, by and large, just isn’t a productive in January as it is when the leaves are still falling. Yet, the deer are still there. It just takes a little more planning, a switch-up in strategy, and more than a little luck.
Posted by Ian Nance at 1/12/2012 05:41:00 PM

Seems like you are an avid hunter! Your blog is great. Any suggestions on the best best hunting gear? Where do you like to shop?