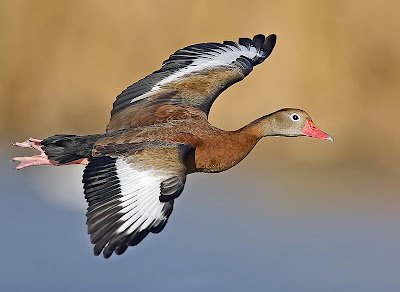 The pre-dawn morning after Christmas, Travis and I snuck out to a wet-weather slime pond with a handful of decoys, a teal Mojo, and palm fronds to prepare an assault on the local waterfowl. In Florida this time of year, one could reasonably expect mottled ducks, teal, and black-bellied whistling ducks arriving to feed in the pinky-deep water on duck weed and other aquatic grasses.

The whistlers had beaten us there. After we’d left the truck, we could hear them peeping and chirping and, yes, whistling, in the reeds. Our arrival spooked three separate flocks up and out of the marsh, each group consisting of a couple dozen birds. We hurriedly fashioned the palm fronds into a makeshift blind in a swath of reeds and awaited daylight, convinced the birds would return.

As the morning lengthened, T and I listened to the chorus of birds that had settled in another wet area to the north. We backed out of our set-up and crept up to the other pond. There, a flock of 30-40 whistlers were in a holding pattern over the wetland. As they dropped down, another flock of 20 popped up, those bold white bands on their wings flashing brightly in blue of the morning. This continued for 20 minutes as we watched mesmerized as flock after flock of black-bellies would rise and fall into the marsh. Hundreds of birds. I’d never witnessed anything quite like it in Florida - the afternoon would be a great hunt.

Black-bellied whistling ducks, also known as black-bellied tree ducks, are odd birds. Taxonomists categorize them closer kin to geese than true ducks. They don’t dabble. They don’t dive. They wade in shallow water with their spindly legs and use their long necks to bend over to graze on grasses and aquatic vegetation. Beautiful in flight, these dark chestnut-brown birds have bright-white wing patches with a pinkish-orange bill and feet that hang behind them. Hens and drakes share similar patterns with a slight deeper contrast in color for the drakes. While flying, they can not be confused with the buff-colored fulvous whistling duck also found in the same regions – or any other duck, for that matter. 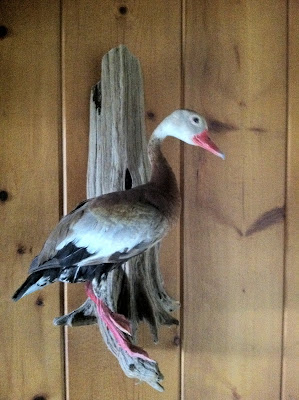 Whistlers don’t migrate, in the true sense of waterfowl, but they flock up in oftentimes huge groups to travel back and forth across their range. As the moniker “tree duck” implies, they nest in holes of trees, and their webbed feet have needle-sharp talons to help them perch on branches. There’s also a reason they are known as whistling ducks. They are very vocal; their peeping whistling while in flight betrays their approach (listen here).

These birds are found in great numbers across Central and South America where, in some locales, they are referred to as “Cornfield Ducks” as they plague grain fields and are treated as such. In the US, their range is limited to Florida and the southern limits of the Gulf Coast states, though wayward birds have been found in northern states. Their population is actually increasing in these areas and bag limits of six represent their availability. In Florida, they’ve become rather commonplace on golf courses and around cattle pastures with a little bit of freshwater and year-round availability of fresh-growth grasses.

From a hunter’s standpoint, whistling ducks are user-friendly. Since they do not migrate and endure the salvoes of gunfire from Canada south, they aren’t particularly hunter-savvy. Also, they don’t get a lot of hunting pressure locally because they prefer environs that differ from the standard-issue ringneck or teal. While I'm sure several are splashed each year in such places, whistlers aren’t likely to decoy for a ringneck spread on the bigger, hydrilla-covered public lakes and rivers popular to state duck hunters.

To purposely hunt them, waterfowlers should focus on areas where whistlers can wade for their food. The STA’s in South Florida hold their share of birds. I’ve witnessed flocks of thousands flying around Lake Okeechobee where they’ll settle down in the shallow marshes. Wet-weather ponds, flooded cow pastures, dug ponds, and flag lily ponds surrounded by trees will attract their share of birds.

As these birds expand, more will be learned about hunting them in the future. I’ve seen them decoy, but suspect we were just where they wanted to be more than them being attracted to teal dekes. If you can get their calling pattern down, I’ve watched folks mouth-call birds around to investigate, but no commercial calls are available that I’m aware of. Whistlers aren’t all that tough to bring down, either. Number 2’s or 4’s is more than enough from a 12 gauge, 3-inch chambering. And their meat is very good, indicative of their diet grasses and grains and avoiding long-distance travel that’ll make migratory birds a touch gamey by the time they hit the Sunshine State. 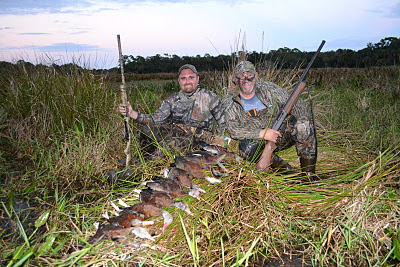 Travis, Don, and I gave them the full nine yards that evening. As we scrambled to set up a Mojo and a handful of Big Duck decoys, the whistlers were still there doing their thing, circling and rising out of the marsh like a busy airport. After the first shot, hundreds of birds flapped their way out of the flag pond like something you’d see on a wildlife documentary about Africa. Between the constant whistling, the passing flocks of so many birds, and the frantic re-loading, it’s tough to honestly detail the flurry of action. We splashed our limit – and a couple bluewing teal – in short order.

I badly wanted one for the wall, but none I could claim that afternoon were worthy. They lacked the deep roseate pink bills of a trophy. That drake came, though, the next morning. We returned with a few other hunters and added to the weekend bag, though the action was not as steady as many of the birds retreated for happier grounds after the first few blasts. I’d put one on the ground, and as I walked to retrieve it, a lone drake cupped into range and the BPS folded him without so much as a ruffled feather when it hit dry land. Sadly, my Nikon took a swim that morning which prevented me from getting a picture. But he’s in the freezer now awaiting a taxidermy trip.

It is beyond me why so many birds were congregated in that small marsh. No one who had hunted this ranch had seen anything like it – it was truly a special opportunity that quickly snuffed out any thoughts of deer hunting. I will say, it’s an exciting thought knowing the populations of these birds are healthy and expanding. As I said above, if this trend continues, we’ll know a lot more about hunting whistling ducks in the future.