If you've never stumbled by my other website on Lakeland Ledger's Polk Outdoors section, I invite you to do so. I've done most of my writing there over the last couple of years, since I get paid for writing there, which is great. But, I keep this site up for story-time and when I get long-winded.

One problem with the other webpage is that it's subscription-based. Sure you get 5 free reads per month, but after that, you gotta pay or get a subscription to the newspaper which won't work for those outside the Central Florida area. I'll reserve my opinions on why anyone would have to pay to access a website for reasons other than those that may get you in trouble with your wife or the law.

But, it was a successful gator season for me - exciting. Wanted to share what I'd already written at Good Hunt. It's a two-for-one feature here. Enjoy! 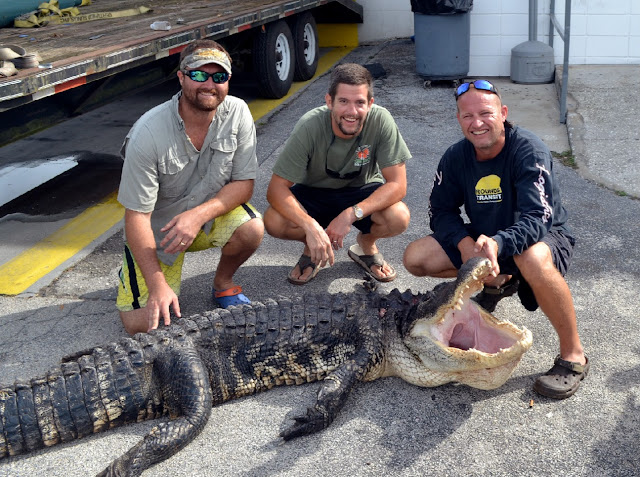 Friday morning we’d spied a large gator in Lake Hancock. I had these 1st phase permits and was eager to wipe the stink of failure away from my 2012 season. Not so eager that I’d take any gator; I still wanted some heft, something to brag about.
This guy appeared to fit the bill. The lake was choppy making targets difficult to spot. The low pressure was palpable, and that’s rarely a positive sign for game movement. Despite this, we’d finally gotten within range of what looked to be a winner.
On the first cast I skipped the snatch hook over his back while he rested on the bottom. I quickly re-cast near the spot, keeping the rod tip lower in hopes of having a better angle to snag him.
Suddenly, it felt like I’d hooked a stone wall. And then the line promptly popped.
It was such a bang-bang play that it’s tough to recall what went wrong. I know I didn’t check the drag and it was a little tight. Maybe I grabbed the spool and maybe that caused the loss. Either way, I was holding the rod so the blame fell on me and rightly so.
I had an encore performance the next morning – this time I definitely failed to check the drag on a different rod and the Dacron snapped. This gator was not nearly as big, and I started feeling like a young girl staring in a mirror hoping she’ll be pretty one day.
Saturday was different, though. The lake was smooth, and gators were more at ease and easily spotted. We opened with running-and-gunning, tossing on gators who’d leave a bubble trail or push a wake. A couple seemingly disappeared and another fortunately surfaced as we saw him for the runt he was and called off the pursuit, but this was well after I’d again diminished our supply of weighted treble hooks.
We went back to general area where I’d broken off the morning before and dropped anchor for a little while. Every now and then heads would surface then disappear. One of them, though, Krunk felt for sure was a goodie. I hadn’t set eyes on him until he surfaced several minutes later behind the boat 60 – 75 yards away. With the decision to act being made, Harris cranked the motor and picked up on his trail.
I’d like to tell you it was a battle for the ages, but that’s really not the truth. Harris was able to keep sight of the gator’s bubbles as Krunk and I flailed hooks at the zig-zagging reptile. He finally took a brief respite, settling on the bottom, and I was able to get a hook in him. Krunk soon followed with his rod before Harris assisted with a handline. There were, thankfully, no more break-offs or tossed hooks or harpoons that regularly happen with snagged gators large and small.
Up to that point we weren’t entirely sure how big he was – “meat gator” was kind of the thought until Harris and Krunk heaved him topside. He began his rolling and thrashing, and it became clear he was a bit more than the average lizard. A harpoon and two bangstick shots later and he was boated.
Later at Tropic Star, the tape said 10ft. 6in. We figured over ten, but he just wasn’t filled out; we even thought him skinny, nothing like the stud we boated two years ago. He was just a younger bull. Still, it was a great catch and start to gator season.
Other gator hunters we spoke with weren’t as lucky. One guide drifted in Friday morning with a decent 9-footer, it looked like. A trio of gentlemen took a pair of meat gators. Brent Faircloth at Tropic Star said that things had been a little slow, mostly because of late-night storms keeping some hunters off the water. But, he expects it to pick up. I’m sure it will.
Phase I ends Thursday morning at 10 a.m. I have one tag left for Hancock. Harris has a Phase II Kissimmee River license, so, all things permitting, it’s on to there.
Gator Hunting Report 2013 - The Zombie Gator 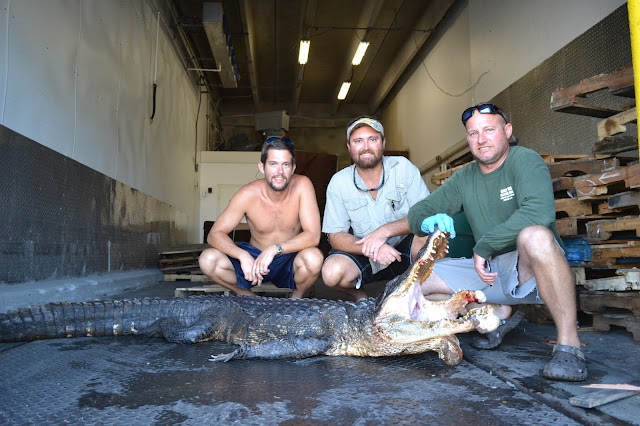 Particular things force me to abandon my appetite during breakfast. For instance, as I read the paper in the mornings, enjoying the daily tales of Egyptian uprisings and cyber-bullying, I’m often confronted by dental ads and those disgusting before-and-after photos. The before photo – typically the one on the left – is the set of rotten, meth-mangled, and otherwise nasty chompers. 100% of the time when I run across these advertisements I drop the paper and throw my breakfast sandwich directly in the garbage.
I witnessed something this morning, however, that might have cured me of this idiosyncrasy.
This gator came to us in the usual way. Harris, Krunk and I returned to Lake Hancock after our success on Saturday. The water was choppy and gators hard to spy in the area we typically hunt. We moved a couple times before spotting three large-ish gators towards the east. We set out after them as they sank to the sound of the boat motor.
Hard to say if this guy was one of the original three, but he was an easy target off the front of the boat and left a solid bubble trail. I was in no mood for spending more time at gator hunting this week – work and family had been pushed aside long enough. When Krunk got the treble hook in him, Harris promptly pulled a handline into him. The gator shook it off once, but he was able to secure the animal again, hoisting him to the surface.
It was at this point we noticed something rather peculiar and downright disgusting – his lower jaw was badly damaged, blown out at the end like a blunderbuss muzzle with a bulbous growth the size of a baseball on the right side.
Stomachs turned – there may or may not have been a little gagging. The loose skin and flesh of the throat spun about in the water – it was enough to turn an undertaker green. 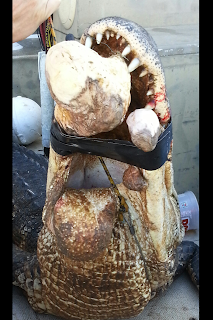 I have no way of saying what had happened. It might have been another gator that ripped into him or perhaps he caught a prop one day. Heck, the jaw could have been an old bite wound or something from when he was 8-inches long. And while I also can’t explain how he could eat with this malformation, the gator was able to endure – after all, he later taped at 9-feet 9-inches. But, he wasn’t surviving the bangstick to the dome, which leads me to the only reasonable conclusion – this was a zombie gator.
After dispatching the monstrosity, we wondered what we should do. No one really wanted to grab him, and we weren’t real sure how to tape his mouth. Still, we pressed forward, taping what could be taped of his jaws and hauling his stinking, mud-caked body aboard.
So, it wasn’t the biggest of gators but without question one of the most unique. I’ll have the skull European mounted – it should be an interesting conversation piece.
I just won’t keep it around the breakfast table.