The Tao of Dove 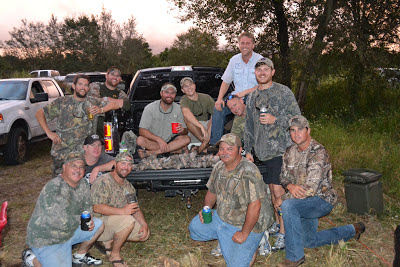 I shot well Saturday. I feel it necessary to open this post with that assertion; in the near-future I’m likely to suffer further bouts of chronic wingshooting incompetence - just need to mark this period of time. A couple buddies who had not done much dove hunting asked me how many boxes of shells to bring. I told them 4 – 6 shots per bird is considered average by the hunting press. They claimed to need half of that, and I knew they were teasing me, but I still didn’t ascribe the humor to their boasts that they sought. The dove have twisted me so poorly in the past, it’s tough to be so boastful, in jest or otherwise.

Beyond my personal accomplishment, our first dove hunt of the year went OK, though fell way shy of my lofty goals. I expected the limits. A lot of work was put into the fields. The property – improved pasture, now void of cattle, surrounded by orange groves - teemed with dove throughout the year. Folks shot well; I’m not a “limit” guy but felt a tad disappointed by the collective bag.

Still, there were mitigating factors. One, we probably did not have had enough folks to keep birds flying. There were 15 shooters on 10 acres of planted field. Folks were clumped together in cliques and too spread out. Next,  had the edge of a front stalled off the for the better part of the week, and we received a ton of afternoon rain. While we dodged the storms most of Saturday afternoon, that low pressure inhibits dove flights. Towards dark those clouds started building and the wind kicked up, and what should have been a better part of the hunt shut down as birds went to roost. And these were largely resident birds, young and small-breasted. By the second phase we should get more northerners. That’s just the way it goes. Fortunately most hunters were not as downtrodden with the results as me, and they were correct about adjusting my mood. I have been on some suck fields over the years.

A busy dove hunt is fun. The camaraderie is tops, watching buddies blast and curse at those brown missiles. Or hollering out cheers to good shots. We did the cookout thing – chicken parts and hamburgers - and brought TV and satellite hookups to watch college football while waiting field time. A few of us hung around camp a while longer and chuckled at the Eager Beavers clamoring to get in the field as soon as possible. Of course when they started shooting, it was mayhem as we scrambled for vests and shotguns and stools.

I shot my Dad’s step-father’s 1400, the only automatic I own. He sold it to me 10 years ago at a family price, just a year or so before he passed. It’s a fair bet I have put more use to it than he did - I assume he had that figured when we made the deal. The shotgun is pleasant to shoot compared to the duck and turkey guns in the safe. It came with a factory modified choke and is limited to 2 ¾ inch rounds. In a time when carrying several different tubes and choke wrenches is in vogue, the simple pleasure of this shotgun matches the sport for which it is employed. Shooting generic factory 7 ½’s, the Ol' Gal's never been found wanting; one day, though, I’d love a slick Over/Under 28-gauge for my dove gun. Maybe when it’s time to pass the  down to my kids I’ll pony up the money for a Citori or Red Label.

While an O/U is an aesthetic pleasure and an automatic is at home on a dove field, I cut teeth on a pump. It wasn't until the 1600 came along that the irreverent blasting began. Atticus Finch would have been disappointed in my shotshell economy, but that  frenetic willingness to strike brass is overpowering to the young and uninitiated, and that's what leads to the 4 – 6 shot rule. I forget where I first read that figure. I could probably look it up on the Internet – but we know how unreliable that can be. You’ll just have to take my word on it. I think I shot well this hunt because I slowed down and didn't take bad shots. This seems to be another disgusting side-effect of age and experience.

Still, dove will unravel plenty of fine shotgunsmen. Over the years I've watched folks who routinely powder clays completely lose their composure on a dipping, diving dove. The ideal dove is the one at cruising speed, just about to light in the field. Miss this chance and he becomes a different beast. I’d say they “wheel” more than any other adjective of the feather and wing. They carom just as a pool ball, but more on a whim, bouncing off unseen winds.

Mourning dove are thought to be ’s most popular gamebird and rightly so. Throughout the South, families and friends honor the start of dove season as the heralding of the hunting year. This was my first event playing host, which partially describes my slight distress over the numbers taken.

But I was assured it was a fine event. Folks will want to do it again, and certainly I will. Hopefully the numbers will be a little higher – but by then I may forget to shoot again.

Nothing better than a good dove shoot.