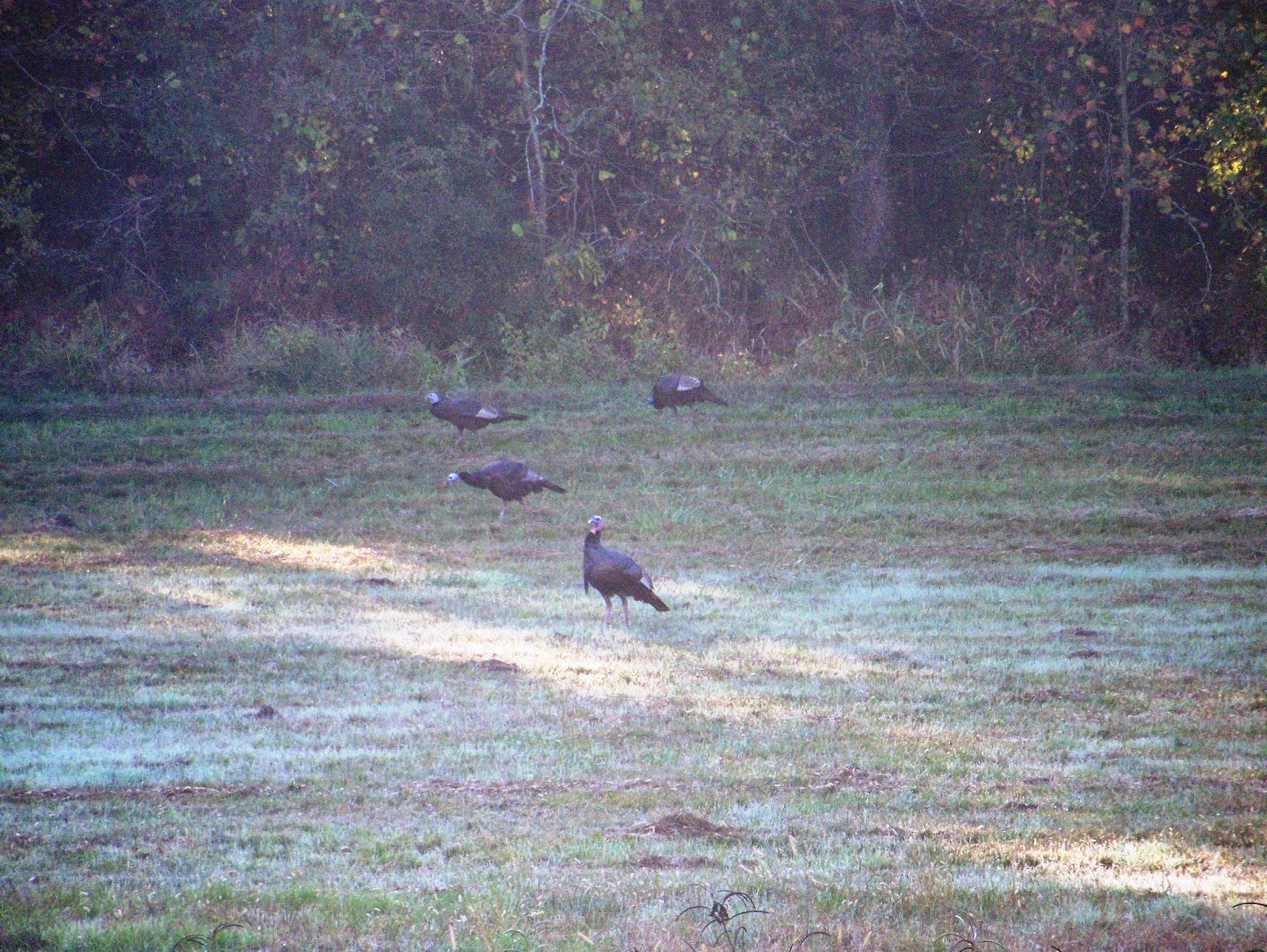 Since I'm a forthright and honest guy who wants to write off this trip for tax purposes, I feel I must come clean about other events that occurred in North Carolina at the end of April. If you recall, I had a shotgun mishap on the second day of the hunt that caused me to miss a nice gobbler. Add this to a miss the Opening Weekend of Florida's season, and 2014 was a pretty humiliating and painful year for errors and screw-ups.

Well, this wasn't quite as bad as that, as I actually put feather on the ground...let's make it short and sweet, because that's how the hunting tale unfolded.

Harris and I had flown to North Carolina to hunt gobblers on property that I've deer hunted for a decade, thanks to Uncle Dennis and his family. 10 years ago there were almost no birds. Over the years we noticed more and more thanks to re-introduction practices by NWTF. One piece of farming land known as Uncle Harry's was especially loaded. (None of these people are actual kin to me by blood; through the course of 20-odd years hunting together, though, the difference is only academic.)

Leading into Uncle Harry's is what's named the Sleepy Hollow Road, a meandering path along a creek splitting agriculture fields and a large block of planted pines. The turkeys will roost in these pines or along the water.

After arriving at Dennis' camp Thursday evening and getting our things settled, Harris and I collected our gear and set out for Harry's to roost a gobbler or perhaps get a shot on one.

We slowly walked down Sleepy Hollow, calling periodically. On the first field on the left we noticed a hen trotting towards the woodline, clearly spooked. I told Harris I would be shocked if the next field didn't have a bird in it - it always holds birds. With enough brush and small trees growing out of the creek and vines snaking down from the pines, we would be pretty well-screened as we advanced down the road.

Sure enough, there was blood-red head visible through the tangle.

Harris and I both dropped to the ground and started to crawl to a spot where we could close the distance for a shot . Harris, though, did not see the tom and was unsure when or where to move and elected to stay put. All I could see was that red head and whiffs of his dark body. I called once or twice, and he'd break into strut but never gobble. Trying to keep trees and brush between us as much as possible, I elbowed to a spot where I could get a clear poke if he were to accommodate his positioning.

For a solid 5 - 10 minutes I held on all-fours, vicious Sampson County skeeters darting my plumber's crack. The gobbler would sift in and out of view between the fresh green Spring-unfurled leaves as he moseyed parallel to the creekbank searching for his love as I attempted to will him into a pie-plate gap in the vegetation where I'd have a clean shot. I would pull the trigger if his still-bright red noggin would center in that space. In a quick motion, I'd have to flip to a sitting position and quickly shoot. One thing was certain, my knees and back weren't taking much more abuse bent over trying to hold steady. The gobbler had grown nervous, too, as no hen ever emerged from the road.

For once, things worked out as he meandered to the gap, head down and slightly angled away as he was sneaking to safety. The jig was up, one way or the other. I committed to Kill Mode, flipped around and fired in about a second, flopping him in the field. It was a fine piece of shotgunning with the 835 that would betray me the next evening.

Until this point, Harris still had not seen the bird but had picked up on him thrashing about and noticed his tail feathers on the edges of his fan were shorter than those in the middle. I had no idea as I fought across the ditch and raced into the field to claim my first NC gobbler, only to find that instead of 8 - 10 inches of beard there was 4 - 5...and that's being generous. Serious ground-shrinkage, friends. I never in a thousand years would've guessed that was a jake. Hunkered down in the road within shooting distance but with an obscured view, I didn't take the time to check if in fact he had a long beard. When he did strut, I couldn't make out his entire fan. But he looked big and dark and strutted. The other jakes I'd seen the previous weeks of hunting were mousy critters, not animals holding fort fanning in the middle of a field where dominant birds could easily locate and spur them down the totem pole. Excited and with poor visibility is usually a bad combo, and that held true to form on this day.

Nothing was illegal, just not my preference for this trip. Discouraged, yet still pumped about executing a fun hunt, I jogged back to Sleepy Hollow and attempted to toss the jake across the creek so I could navigate it myself. Well, he rolled down into the water, and in my efforts to retrieve him I managed to yank out all of his tail feathers. Impressive photos, he did not make. Matted down and soaking-wet scrawny, it was a hard sell to make-believe he was anything but a jake after the fact, nubby spurs and stunted beard notwithstanding.

Had he wandered in clear view like a trio would the next morning, he would have lived. While I hate making excuses, these things happen. But the more I considered the situation, the more disappointment waned. It was an excellent spot-and-stalk hunt on a treasured piece of property with a good friend. I guess I'm not as embarrassed as I thought, and it'd be wrong to diminish that bird because of a few inches of beard.

Just need to be more careful next time on target identification.

nice article thanks for sharing.